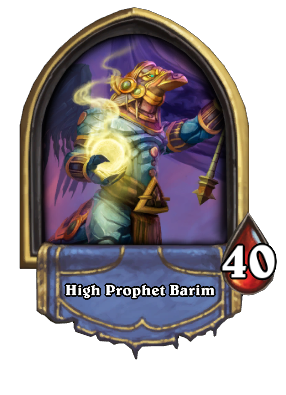 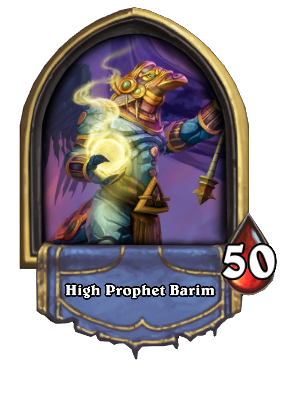 Barim "prophets" from the misfortune of others.

High Prophet Barim is a boss that can be encountered initially in Chapter 1 of Tombs of Terror. After completing Chapter 1, this boss encounter will be available in any completed chapter.

In Normal Mode, focus on taking out his minions until the boss runs out of cards and/or is playing from behind (one card per turn). Make value-trades with your own minions first, then hit face. Be considerate of which minions you're killing, as the boss does have some resurrect abilities, and ideally you want to flood the resurrect pool with worthless minions instead of those with Deathrattle. Once you develop a strong board, the Lifesteal hero power is inconsequential, and you can directly attack face.

In Heroic Mode, focus on playing strong and sticky minions every turn, and attacking face as quickly as possible. The boss' deck plays similarly to Big Priest, but less optimally. The boss will be defensive until late-game, and then drop big threats that can easily overwhelm you. First Aid Kit counters Barim's hero power quite well as your deck is definitely will contain not only 1-HP minions. Kill Auchenai Soulpriest as soon and as often as possible, so it enters the boss' resurrect pool and makes the Lifesteal hero power useless. Transform effects (such as Polymorph, Devolve, and so on) are very useful against late-game minions, as are theft or "return to hand" mechanics. If the game goes on so long that Hakkar, the Soulflayer is played and killed, it's extremely difficult to win, as the Deathrattle effect will snowball. Save damage spells for lethal, or clearing a taunt so your minions can do so.

High Prophet Barim
Begone! You are not welcome here!

High Prophet Barim
I foresee great pain...
Kneel before me!
The Heavens will take you!
Trust in my vision.

High Prophet Barim
Death is only the beginning for me! Not for you.
Leave it to me to bring in the high profits.
The winds bend beneath my wings.

Even humans walk my path.

These are desperate times.

Your insolence has cost you!

You toy with unimaginable power.

Your tribe was always inferior, Amet.

Our history should not be used against us!

High Prophet Barim is a tol'vir boss in the Lost City of the Tol'vir.

From the World of Warcraft Adventure Guide
High Prophet Barim is the hallowed spiritual leader of the Neferset. Along with General Husam, he rallied his fellow Neferset against Siamat and imprisoned the air elemental. Regardless, some dark force still drives Barim and his followers to terrorize Uldum.