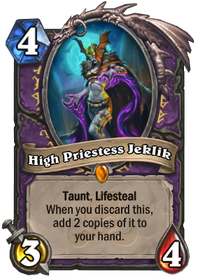 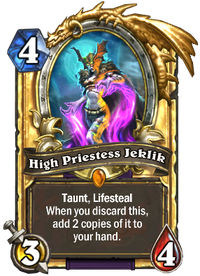 Taunt, Lifesteal
When you discard this, add 2 copies of it to your hand.
Flavor text

If you love Jeklik, set her free. YOU CAN'T GET RID OF HER.

For the boss of the same name, see High Priestess Jeklik (boss).

High Priestess Jeklik can be obtained through Rastakhan's Rumble card packs, or through crafting.

High Priest Jeklik is a solid minion possessing Taunt and Lifesteal, which are exceptional keywords for defensive minions, especially for the often self-harming Warlock. Her real power, however, comes from her discard synergy. By duplicating herself whenever getting discarded, she not only compensates for the value you would normally lose from discarding, she indirectly improves all future discard outcomes; the more High Priestess Jekliks there are, the more likely you are to discard her, which makes it more likely to discard her again, and so on. It only takes one discard to get her effect to start snowballing, even to the point of critical mass with enough discard effects.

High Priestess Jeklik was the High Priestess of the Primal Jungle God Hir'eek, the Bat. She may have been originally from Zandalar.

In order to quell Hakkar the Soulflayer, the trolls of the land banded together and sent a contingent of High Priests into the ancient city of Zul'Gurub. Each priest was a powerful champion of the Primal Gods, but despite their best efforts they fell under the sway of Hakkar and were forced to channel power into the blood god. Ultimately, Jeklik and the other priests and priestesses were slain when adventurers entered the city, with her last breath, Jeklik cursed Hakkar, who was killed by the adventurers shortly afterwards.

Several years later, the shade of Jin'do recovered the body of High Priestess Jeklik and enlisted the aid of Zanzil the Outcast to resurrect her in the service of Hakkar. This attempt was thwarted when agents of the Darkspear Tribe entered Zul'Gurub and destroyed Jeklik's body, preventing her resurrection as a servant of Jin'do and the Gurubashi.

In Hearthstone lore, Jeklik serves as the champion of Hir'eek's Bats, the warlock team in Rastakhan's Rumble.

The shrieking, shadow-skulking aspirant of the bat loa Hir’eek revels in the boos she gets from the crowd. Warlocks willing to make the right sacrifices will find Jeklik a useful champion who seems to be everywhere at once.[5]