This article is using {{Card template}}.
See Help:Style guide/Card for how to edit this kind of article.
Edit this article
High Priest Thekal
50126 • TRL_308
Regular 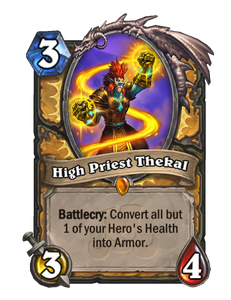 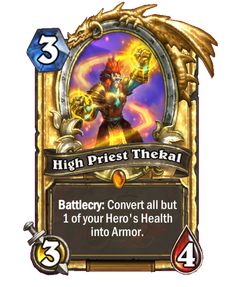 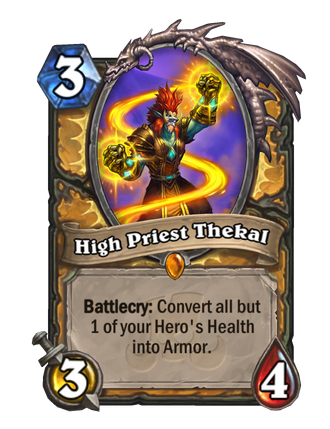 This card is a powerful inclusion in any Paladin deck that runs healing. By converting almost your entire Health to Armor it allows you to "overheal" with healing cards that could often go to waste if you have little opportunities to take damage, whether if it's from being ahead on board or lacking a weapon and enemy minions to trade into. With Thekal, you can get a much earlier head start in getting the full value out of heals, which is especially relevant for cards that synergize with healing such as

Zandalari Templar. In addition, as a vanilla 3-mana 3/4 it has solid base stats that can fit into curve easily.

In Wild, this card lets you play free Molten Giants as early as turn 3 without any downsides incurred. It can also be exceptionally powerful with

Reno Jackson, converting all your health into armor, then allowing Reno to restore your health back to maximum.

Platebreaker, which can outright lose the game for them if they haven't gotten the chance to heal off most of the converted Health afterwards.

High Priest Thekal was the High Priest of the Primal God Shirvallah, the god tiger. In order to quell Hakkar the Soulflayer, the trolls of the land banded together and sent a contingent of High Priests into the ancient city of Zul'Gurub. Each priest was a powerful champion of the Primal Gods, but despite their best efforts they fell under the sway of Hakkar. Now the champions and their Primal God aspects feed the awesome power of the Soulflayer. Any adventurers brave enough to venture into the foreboding ruins must overcome the High Priests if they are to have any hope of confronting the mighty blood god.

This master fighter is a fan favorite! Wielding the Light as a weapon, he can use his healing energy in ways Paladins haven't seen before. Confident to a fault, Thekal moves almost as quickly as he talks, dancing around his opponents for the crowd.[3]