This article is using {{Card template}}.
See Help:Style guide/Card for how to edit this kind of article.
Edit this article
Hidden Cache
40339 • CFM_026
Regular 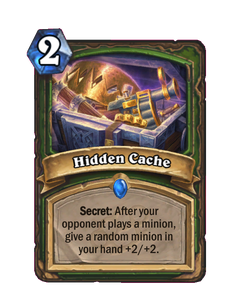 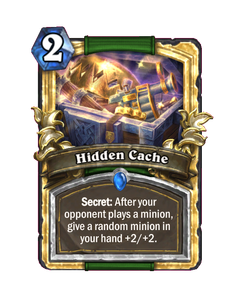 Dimensions: Full • 330 x 410px
Secret: After your opponent plays a minion, give a random minion in your hand +2/+2.
Flavor text

There is an urban legend that the first Toxic Sewer Ooze was born because a rookie Goon stashed an open container of milk in a Hidden Cache. 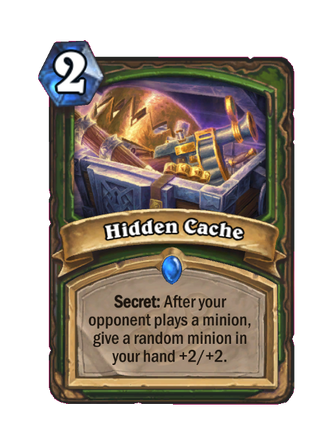 Hidden Cache is a rare hunter spell card, from the Mean Streets of Gadgetzan set.

Having only Spells or Weapons in hand when this Secret is out can confuse the opponent into thinking that this is a different Secret, since their minions played will not cause it to activate in that case. This could lead them to play suboptimally in an attempt to play around the wrong Secret's effect.