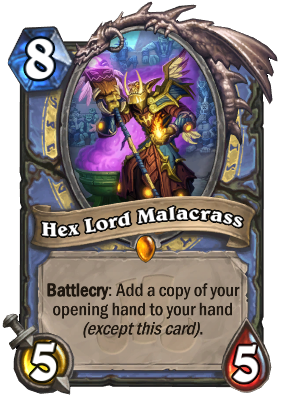 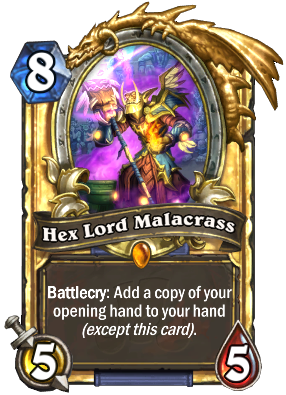 Battlecry: Add a copy of your opening hand to your hand (except this card).
Flavor text

For the boss of the same name, see Hex Lord Malacrass (boss).

Hex Lord Malacrass can be obtained through Rastakhan's Rumble card packs, or through crafting.

Hex Lord Malacrass is a very value-oriented card for control decks with peculiar applications. While normally in the mulligan phase you generally opt for cheap cards you can play early on, doing so will weaken the value Malacrass provides. Maximizing his effect will require a balance between low-cost cards to play at the start of the match and mid to high-cost cards that you want another copy of late game.

Malacrass has a consequence of duplicating Quest cards, which means you could possibly complete Open the Waygate twice for two Time Warps, a difficult but not impossible task, or another Raid the Sky Temple if you decide to switch back to it later in the game.

From the original World of Warcraft website
Furious at the Horde's latest betrayal, Zul'jin was pleased when the witch doctor Malacrass approached him with a devious plan to crush the elves once and for all. Malacrass had studied the Zandalari high priests and their ability to call upon the favor of the animal gods. He also knew that the elves had magically bound one of the mighty naaru, using it to channel the power of the Light into their own ranks. Malacrass had devised a similar plan: to seal the power of the animal gods within the bodies of the Amani's strongest warriors. Zul'jin quickly approved the plan and lent his full support. Malacrass experimented tirelessly and succeeded in imbuing four warriors with the essence of mighty animal gods: the lynx, dragonhawk, bear, and eagle. Some adventurers fear that Malacrass may have bound a fifth, even darker essence within his own soul....