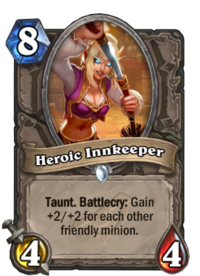 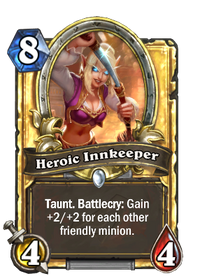 Taunt. Battlecry: Gain +2/+2 for each other friendly minion.
Flavor text

We reserve the right to refuse service to any 1/1.

Heroic Innkeeper is a common neutral minion card, from the Rise of Shadows set.

Heroic Innkeeper can be obtained through Rise of Shadows card packs, or through crafting.

This card has strong synergies with cards that can create a wide and/or sticky board. On its own the Heroic Innkeeper provides sub par stats for its cost. However, the mere presence of three minions on your side of the board can already make this card an 8 cost 10/10 with taunt, which can be game-winning.

A solid strategy involves making a deck that can repeatedly flood the board until your opponents runs out of AOI and/or minions.

Heroic Innkeeper is strikingly similar in appearance to Isirami Fairwind, the high elf innkeeper of A Hero's Welcome, an Alliance inn in Dalaran. However, whereas Isirami has only ever been shown in World of Warcraft to be a simple innkeeper, Heroic Innkeeper appears far more ready to engage in battle, having hidden a blade inside her broom.