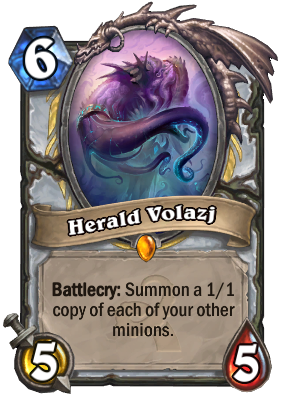 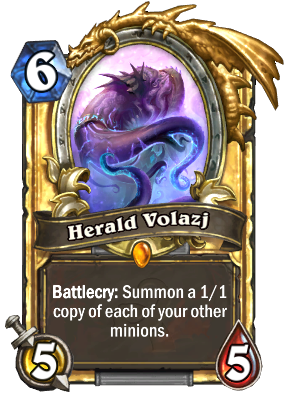 Battlecry: Summon a 1/1 copy of each of your other minions.
Flavor text

Herald Volazj is a legendary priest minion card, from the Whispers of the Old Gods set.

Herald Volazj can be obtained through Whispers of the Old Gods card packs, or through crafting.

This Battlecry is ideal to summon 2-3 other minions with useful Deathrattles or ongoing effects. This card's value lies in the minions available to copy, and given its stat-reducing effects, is primarily effective for minions with useful abilities. To copy a single high-stat minion, use Faceless Manipulator instead.

If you run a Silence Priest deck, typically one with low-cost, high attack minions that can't attack e.g. Ancient Watcher, this card will combo in perfect synergy with Wailing Soul.

In Arena it will vary from being good to not so great based on what you have on the board.

Summon
Gaze into the void.

Attack
Your mind betrays you!

"They who dine on lost souls know only hunger." - Herald Volazj

Herald Volazj is a faceless one in service of the Old God Yogg-Saron.

Herald Volazj, a faceless one, is the last boss of Ahn'kahet: The Old Kingdom. He is located within the Fallen Temple of Ahn'kahet. He is a herald of Yogg-Saron and enemy of the nerubians.

(They who dine on lost souls know only hunger.)

(Gaze into the void. It is the perpetuity in which they dwell.)

(They drink your fear: it is the blood of life.)

(They are the whisper on the shivering wind.)

(They do not die; they do not live. They are outside the cycle.)

(Where one falls, many shall take its place.)

Amid the Scourge's invasion of Azjol-Nerub, many of the kingdom's denizens tunneled underground to escape the Lich King's minions. Yet some of them dug too deep, exposing the tendrils of Yogg-Saron. Roused by this disturbance, the entity has sent one of its most ancient warriors - Herald Volazj - to cull the beleaguered nerubians and annihilate anyone foolish enough to threaten the Old God.