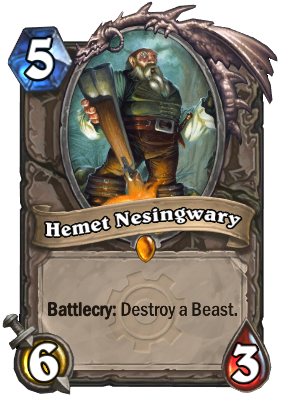 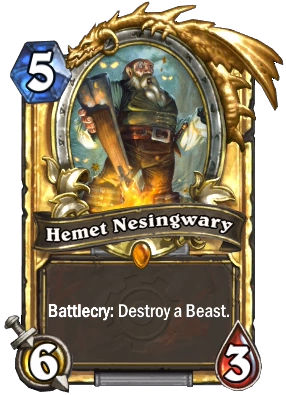 It's hard to make a living as a hunter in a world where beasts instantly reappear minutes after you kill them.

For the tutorial boss of the same name, see Hemet Nesingwary (boss). For the Journey to Un'Goro card, see Hemet, Jungle Hunter

Hemet Nesingwary is a legendary neutral minion card, from the Goblins vs Gnomes set.

Hemet Nesingwary can be obtained through Goblins vs Gnomes card packs, or through crafting.

An ideal minion to use against the hunter class since he has a lot of Beasts.

Hemet's poor stats for his cost and extremely limited Battlecry have resulted in him being considered by many to be one of the worst cards in the Goblins vs Gnomes set and, until the release of Majordomo Executus, usually recognised as the worst Legendary in the game.

Summon
Ah, the thrill of the hunt.

Hemet Nesingwary is a quest giver and game hunter seen in Nagrand, Sholazar Basin, Valley of the Four Winds and alternate Nagrand. Considered the greatest hunter on Azeroth, he leads safaris to hunt the wildlife of Azeroth and beyond, and is the author of The Green Hills of Stranglethorn. He is generally to be found in the wild, camped out with a group of fellow hunters, surrounded by a variety of grizzly trophies collected from the native game of the area. Nesingwary and his cohorts tutor adventurers on the hunting and trapping of wild creatures.

Hemet fought in many battles alongside Ajeck Rouack's father, and has been described by his servant Barnil Stonepot as a war hero of the Alliance. Nesingwary is the father of Hemet Nesingwary Jr., who has taken over some of his father's duties in Stranglethorn in order to allow him to focus on new and even more exotic game in newly discovered lands.

Hemet returns in Journey to Un'Goro as a new card, Hemet, Jungle Hunter.