This article is using {{Card template}}.
See Help:Style guide/Card for how to edit this kind of article.
Edit this article
Hellfire
950 • CS2_062
Regular 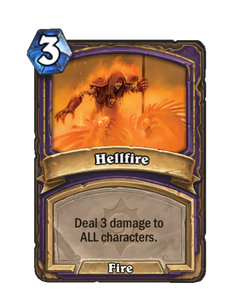 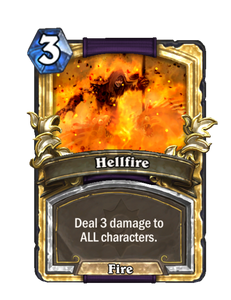 It's spells like these that make it hard for Warlocks to get decent help. 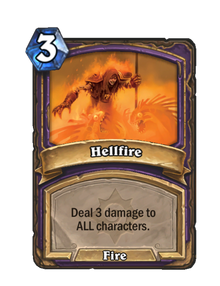 Hellfire is a warlock spell card, inducted into the Legacy set, formerly from the Basic set. 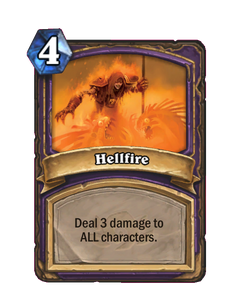 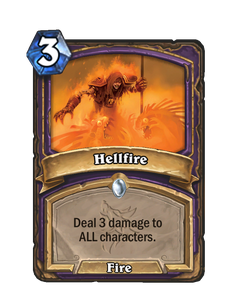 Regular and golden Hellfire are uncraftable and cannot be crafted or disenchanted.

Two copies of regular Hellfire are obtained for raising warlock to level 1.

Two copies of golden Hellfire (Core) are obtained for winning 50 games as warlock.

Hellfire (Core) is uncraftable and cannot be crafted or disenchanted.

Hellfire is one of the strongest board wipes in the game but its use must be carefully weighed. It is most obviously advantageous when the player has far fewer or less valuable minions on the board than their opponent, or is able to more easily recover from the board wipe, whether through sticky minions such as Piloted Shredder, or due to strong card advantage. It can also be useful for activating effects like Nerubian Egg.

It is also important to remember that Hellfire not only damages all minions on the field, but also yourself and your opponent directly. This can allow it to be used as a nuke to push past Taunts, but can also make its use unwise by lowering your Health too much. Notice that if Hellfire simultaneously deals fatal damage to both heroes, the game will end in a draw.

Hellfire is a channeled warlock spell which causes a small amount of damage to all nearby hostile targets - as well as the warlock themselves - every second while it is being channeled. The spell is commonly used to clear weak "trash" mobs, although the warlock will likely need healing in order to ensure they do not themselves succumb to the spell's damage.