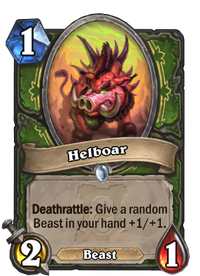 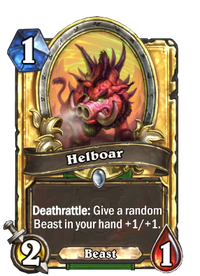 Deathrattle: Give a random Beast in your hand +1/+1.

Helboar is a common hunter minion card, from the Ashes of Outland set.

Helboar can be obtained through Ashes of Outland card packs, through crafting, or as an Arena reward.

A simple handbuff effect on a 1 cost minion with great stats for its cost. It provides a small +1/+1 on a future beast. Though unreliable, it can be best on beast with Rush or beast that can be played on curve later on.

Helboars, also known as felboars and demonic boars, are spiny, mottled boars that burn with different coloured flames. It comes in a variety of looks, possibly related to the amount of exposure it has had to the demonic energies of the Twisting Nether. Helboar were once ordinary boars, now mutated by demonic influence. In Azeroth, the helboar is native only to the Blasted Lands. The Draenor variety found on Hellfire Peninsula show far larger signs of demonic blood. Their hides are brightly colored and twisted into a vile parody of a boar.