This page aims to chart the major events of Hearthstone, from its initial conception to the introduction of the latest feature.

For a timeline of Hearthstone's meta history, see Meta#History.

Deadlines for StarCraft II cause all of Team 5 except Eric Dodds and Ben Brode to be reassigned to that game for around a year. Dodds and Brode begin prototyping, rapidly iterating through myriad designs.[4]

Dodds and Brode produce the first working version of Hearthstone, using Flash.[4] The rest of Team 5 return from working on StarCraft II to begin developing Hearthstone from this basic prototype into the full game.[4]

Following mixed responses from within the company to Hearthstone's initial announcement, in December 2012 the game achieves "broad exposure" across Blizzard, with a substantial portion of employees playing Hearthstone, and beginning to get "really excited" for the game.[1] 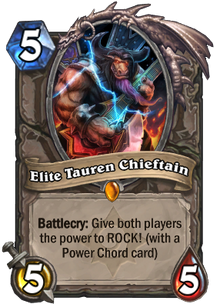 Champions are gathering from around the world to witness the next exciting thing Hearthstone has in store. News travels far and wide in search of brave new faces ready to answer the call to arms — Are you one of them? Muster for battle and mark July 22 on your calendar. The next bit of news won’t come by carrier pigeon — thankfully, we have much better ways of communication now. Victory awaits.[23]

"You are cordially invited to a most majestic, marvelous, magical event, the likes of which have never been seen before! It is our most sincere hope that you'll be able to join us!"

The invite is widely taken as referring to the upcoming revealing of the game's next adventure.

"Greetings, my dear friend! Your valiant effort and masterful display of strategy in channeling the power of the Old Gods has won you the admiration of people across Azeroth.

We would would be honored if you would join us for a once-in-a-lifetime event that will be full of magic and celebration. We also have something very special in store for you!

Please be prompt, as we have an unforgettable adventure planned!

Both the invite's text and graphic details are widely taken as confirming Karazhan as the upcoming adventure, with the visual style and celebratory tone making many think of a "magical dinner party" at the tower, and the feathers seen at the top and bottom of the invite widely assumed to represent Medivh.