This article is using {{Card template}}.
See Help:Style guide/Card for how to edit this kind of article.
Edit this article
Healing Touch
773 • CS2_007
Regular 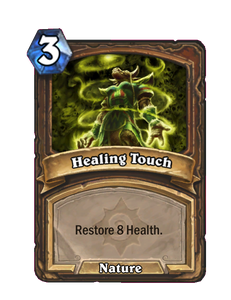 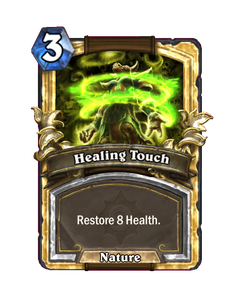 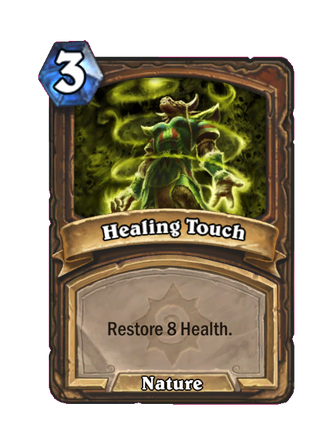 Healing Touch is a druid spell card, inducted into the Legacy set, formerly from the Basic set. 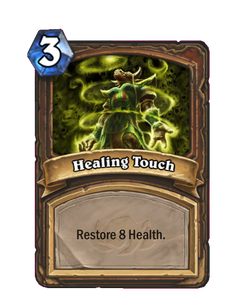 Regular and golden Healing Touch are uncraftable and cannot be crafted or disenchanted.

This card was sometimes used to stop aggro decks before other more cost effective cards were released. These decks rely on rapid bursts of damage to push the enemy over the brink, often trading longevity for more immediate damage potential. Healing Touch can counter these decks' rapid onslaught, slowing the pace of the game and exhausting the opponent's options or simply allowing the druid to survive into the later game where they may have the advantage.

Similarly useful for control decks seeking to survive weak early rounds, by drawing the game out until they can summon powerful minions to defend them and dominate the board.

Generally useful for keeping the druid's Health above a critical number, preventing the opponent from defeating the player the next turn.

Can be used to restore Health to minions, which is particularly useful with the druid's large Taunt minions such as

Ancient of War and

Ironbark Protector. Under the right circumstances, granting even a couple of points of Health to a critical minion can be far more useful than healing the druid themselves for the full amount.

Feral Rage is in most cases a better card, with the same cost. Unlike Healing Touch its Armor option can still be used at full value when the hero is at full Health, is compatible with Molten Giants, and offers a counter to

"The druids' reverence for nature allows them to bestow wondrous gifts upon their allies."

In World of Warcraft, Healing Touch is a level 26 druid healing spell. It is the largest direct heal available to the class, but it has a high mana cost and cast time.