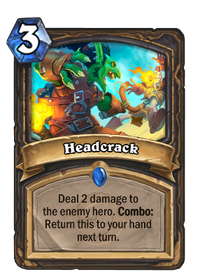 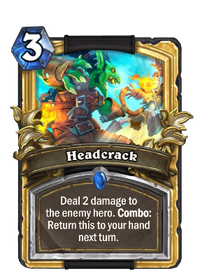 Deal 2 damage to the enemy hero. Combo: Return this to your hand next turn.
Flavor text

When all else fails, nothing beats a swift whack upside the head.

Headcrack is a rare rogue spell card, inducted into the Legacy set, formerly from the Classic set. 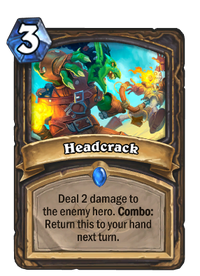 Headcrack can be obtained through Classic card packs, or through crafting.

As a damage spell, Headcrack benefits greatly from Spell Damage.

Strictly speaking, its primary effect is a weak, costly alternative to most other classes' arsenal, such as Arcane Shot, Frostbolt, Mind Blast or Lightning Bolt. Its combo, however, sets it apart from the rest and opens up some very unique options: