This article is using {{Card template}}.
See Help:Style guide/Card for how to edit this kind of article.
Edit this article
Haunted Creeper
1781 • FP1_002
Regular 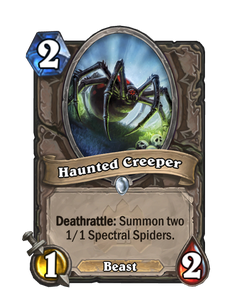 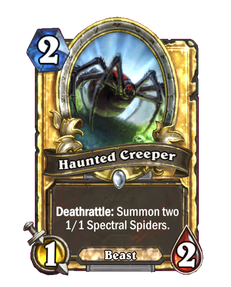 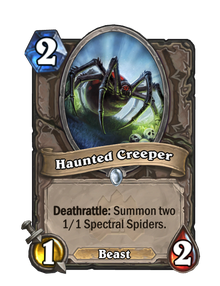 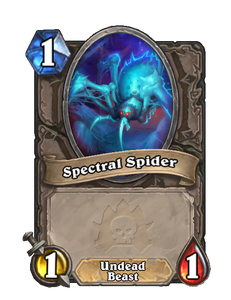 Though weak by itself, the Haunted Creeper's Deathrattle will spawn two Spectral Spiders to take its place. This discourages opponents from destroying it, or from using AoE removal while it remains on the field. Haunted Creeper is therefore an effective anti-removal minion, useful for ensuring the player will have something left on the board even in the face of a complete board wipe.

As a "sticky" 1/2 for 2 mana, Haunted Creeper trades tempo for persistent board presence and potentially card advantage. It excels in decks seeking a constant or large board presence, such as for use with Sea Giant, Defender of Argus or Savage Roar, as well as initially benefiting from Beast synergy.

Cards such as Knife Juggler can take advantage of the Deathrattle.

Creepers are a type of large, fearsome spiders found throughout Azeroth.

Haunted Creeper was originally named "Dread Creeper" and was a 3 Mana 3/2 minion. It's deathrattle originally summoned "1/1 Spiderlings" which were originally also Beasts, but this was found to be too strong for hunters' Beast synergy. They were conceptually changed to be undead in order to make the lack of a Beast type "less awkward". [3][4]