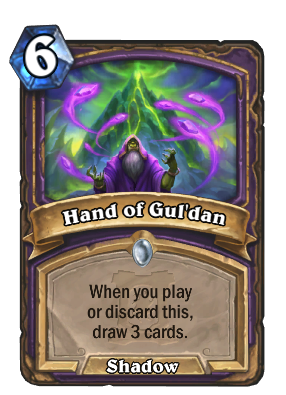 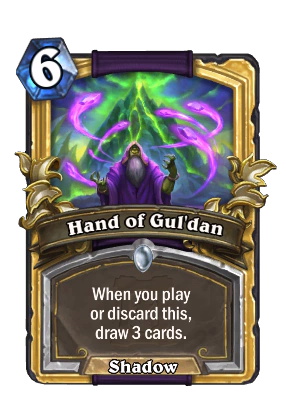 When you play or discard this, draw 3 cards.
Flavor text

As long as you deck has only cards that cost 5 or less and Hand of Gul'dan, Expired Merchant or Nightshade Matron can guarantee discarding this card, which provides insane card draw advantage early in the game. It is certainly a welcome addition in warlock's discard decks as it needs as many on-discard effects cards as they can to make up for discard's card disadvantage and randomness.

Since warlocks have a lot of card drawing, 3 is quite a huge number and may cause overdraw. Remember to count the cards in your hand accordingly before when discarding this card, especially while Malchezaar's Imp is in play or you plan to play Doomguard with 2 Hand of Gul'dans in your hand.