This article is using {{Card template}}.
See Help:Style guide/Card for how to edit this kind of article.
Edit this article
Hammer of Wrath
250 • CS2_094
Regular 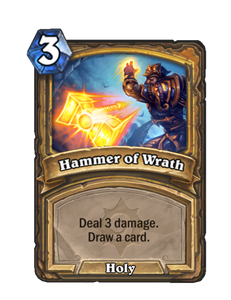 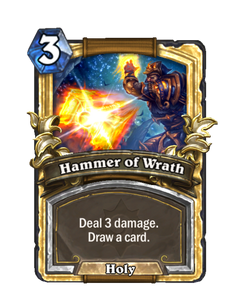 A good paladin has many tools. Hammer of Wrath, Pliers of Vengeance, Hacksaw of Justice, etc. 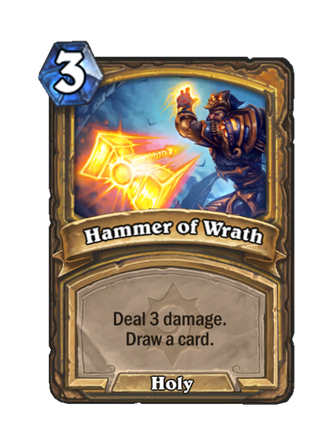 Hammer of Wrath is a paladin spell card, inducted into the Legacy set, formerly from the Basic set. 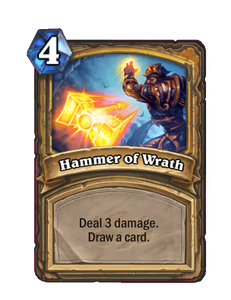 Regular and golden Hammer of Wrath are uncraftable and cannot be crafted or disenchanted.

Hammer of Wrath is one of few single-target removal spells available to this class. It's similar to the druid's

Starfire or the rogue's

Shiv in that all three deal some amount of damage to a minion or hero while drawing the user a card. As such, its most efficient use is the removal of an enemy minion with exactly 3 health or the removal of a problematic minion when one is incapable of attacking it directly (such as when an enemy controls a minion with Taunt).

"You cannot run from the divine hand of justice."

Hammer of Wrath is a paladin ability from World of Warcraft that instantly deals direct Holy damage to the target. Only usable on targets under 20% health, it is designed as an execute ability for use on low health enemies.