Edit
watch 02:53
GTA: The Criminal Enterprises - The Loop
Do you like this video?
Play Sound
Hamilton Chu
Regular 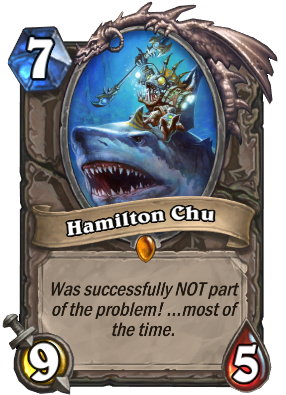 Elite
Was successfully NOT part of the problem! ...most of the time.
External links

Hamilton Chu is a former executive producer of the Team 5 Hearthstone development team.[1] He is featured in the credits card of the same name.

As executive producer for Blizzard Entertainment's Hearthstone: Heroes of Warcraft, Hamilton Chu provides the leadership and direction necessary to deliver players a Blizzard-quality gaming experience. In his role, Chu is responsible for strategic planning and business operations, providing management support for the development leadership, and generally tanking issues for the team whenever necessary.

As head of Blizzard’s strategic initiatives group, his other duties include leading business operations for World of Warcraft and managing Blizzard’s creative development department. Before joining Blizzard Entertainment, Chu served as a producer on Halo and Halo 2 for Bungie before going on to sell his soul to the MBA gods.

In his spare time, Chu enjoys reading comics, writing stories, and pwning noobs of all shapes and sizes.[4]