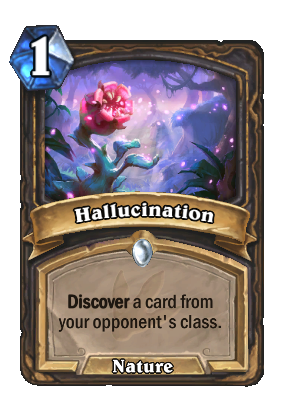 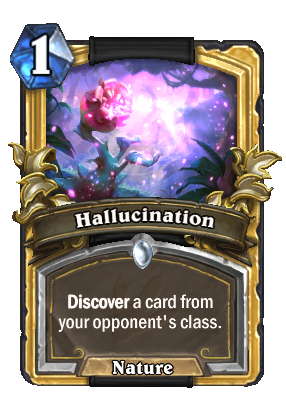 Discover a card from your opponent's class.
Flavor text

It's the good kind of hallucination.

Hallucination is a common rogue spell card, from the Journey to Un'Goro set.

Hallucination can be obtained through Journey to Un'Goro card packs, or through crafting.

Hallucination fits the Rogue theme of generating cards from their opponent's class.

As a 1-mana card that replaces itself, allowing the player to choose among three random cards offered, this card is a reasonable play on turn 1. It can also be used later on in the game to smooth out the mana curve. As a Discover card, Hallucination allows the player to select the best option out of 3 with respect to the current game state. Since the cards are from the opponent's class, the options can include effects such as healing that are not normally present with rogue class cards.

At 1 mana, Hallucination can be used as a way to activate cards with Combo such as Eviscerate. It fits especially well in a Miracle Rogue deck, as it can be played after a Gadgetzan Auctioneer, which will draw an additional card from the deck alongside the Discovered card. Miracle Rogue decks can also use Hallucination prior to playing Edwin VanCleef, giving him an additional +2/+2.

Since it generates a card from a different class, Hallucination has strong synergy with Ethereal Peddler.