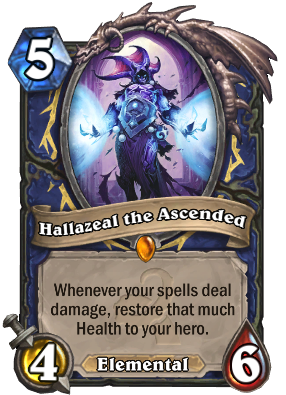 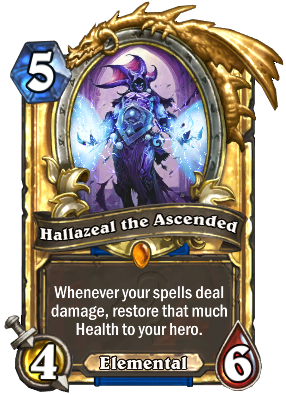 Whenever your spells deal damage, restore that much Health to your hero.
Flavor text

Hallazeal the Ascended is a legendary shaman minion card, from the Whispers of the Old Gods set.

Hallazeal the Ascended can be obtained through Whispers of the Old Gods card packs, or through crafting.

Hallazeal the Ascended is best used for heavy-damage spell decks and can quickly turn the tables when your hero is at low Health. To get the most out of this minion, summon him when your Health is relatively low and have at least one damaging spell in your hand. This also works well with minions with Spell Damage to boost both the damage and the healing output.

AoE spells are the best since they can rack up a lot of damage. Hallazeal works especially well against aggressive minion-heavy decks such as Zoolock, with a spell like Lightning Storm serving not only to wipe most or all of the opponent's board, but also to heal the shaman for a huge amount.

Hallazeal the Ascended is a level 82 elite elemental ascendant residing within L'ghorek in the Abyssal Depths.

Elemental ascendants are Twilight's Hammer cultists that have been twisted into elemental beings via 'ascension'. The Ascendant Council members have long forgotten their existences as mere mortals. From their wicked sanctum, they oversee the selection of new ascension candidates.

Elemental ascendant are the highest echelon of Twilight's Hammer cultists who become one with the elements. The Twilight Cultists hope that they will one day become elemental ascendants. During a dark ritual they are infused with elemental powers, transforming them into monstrosities. The ascension process seems to involve draining something from other elementals or demigods.

However it seems that some shamans have mastered a more co-operative, though temporary, form of ascension.