This article is using {{Card template}}.
See Help:Style guide/Card for how to edit this kind of article.
Edit this article
Halazzi, the Lynx
50659 • TRL_900
Regular 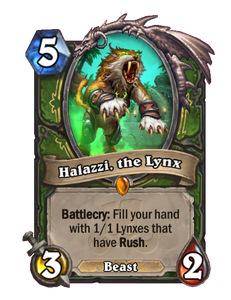 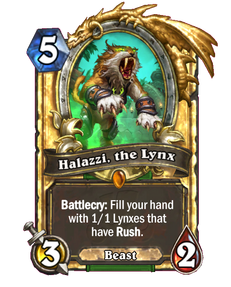 Remember, you’re only as strong as your weakest lynx. 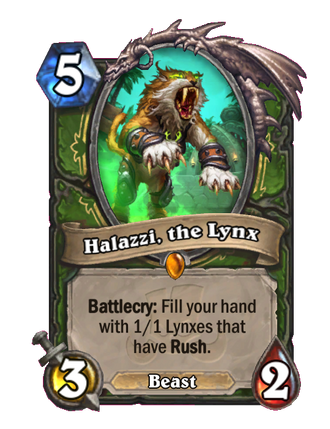 Halazzi, the Lynx is a legendary hunter minion card, from the Rastakhan's Rumble set. 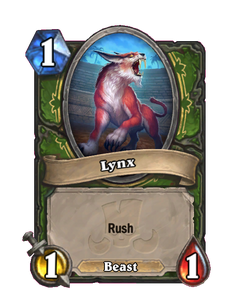 Halazzi is a mid-game value-oriented card. While each Lynx is weak, they are cheap and have Rush, which can be used for a constant stream of removal. Because Halazzi has very low stats, it's preferable to wait until you are running low on cards in your hand for a second wind to maximize the amount of Lynxes you get. Halazzi should be played when you have at least 6 mana to prevent yourself from getting milled next turn.

Halazzi has good synergy with his own spirit, giving each Lynx summoned +1/+1. Along with the spirit, the many Lynxes generated by Halazzi could be traded into enemy minions to power up a

Scavenging Hyena and afterwards revived by

Revenge of the Wild, giving you a sticky board presence. He also has strong synergy with

Arcane Fletcher, turning your entire hand into random spells. With

Toxmonger, all your Lynxes turn from 1 damage pings into hard removal.

Since the Lynxes are 1 mana minions, they can quickly complete

The Marsh Queen quest by being played. It also add a lot of minions to help complete

Unseal the Vault, as well as turning them into potent removal once

Halazzi is the lynx god of the Amani trolls.

Hex Lord Malacrass stole his essence, imbuing it into one of the Amani's greatest hunters. However, this spirit is chained by

Zul'jin and is freed when the chieftain troll died.

Halazzi appears with the other Amani gods after the quest Breaking Through Jin'Alai, directing the player to the leopard goddess, Har'koa.

The Amani gods are also summoned after the quest Rampage, where they tell the player to defeat the guardians at the Altar of Quetz'lun and kill the Prophet of Akali.

Halazzi appears in Zul'Aman where his spirit is chained by Daakara. He is freed when Daakara is killed.

In Hearthstone lore, Halazzi serves as the patron loa of Halazzi's Lynxes, the ferocious hunter team in Rastakhan's Rumble.