Edit
watch 02:30
Dead Cells Final DLC - The Loop
Do you like this video?
Play Sound
Hakkar, the Soulflayer
Regular 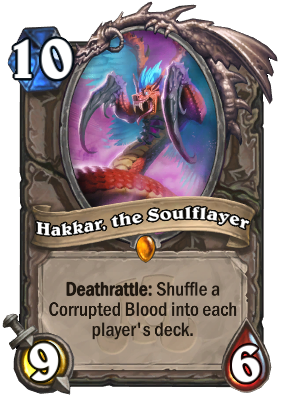 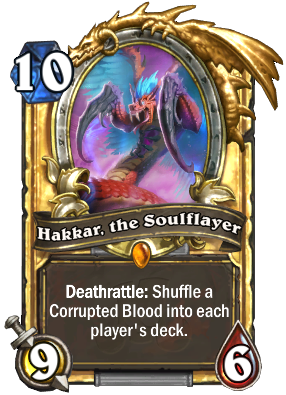 ATTENTION: Do not enter any major city while infected with the Corrupted Blood!

Hakkar, the Soulflayer is a legendary neutral minion card, from the Rastakhan's Rumble set.

Hakkar, the Soulflayer can be obtained through Rastakhan's Rumble card packs, or through crafting. 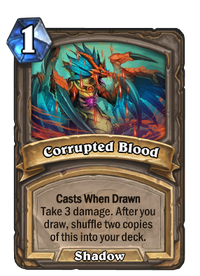 Hakkar does not impact the board the turn he is played, and is susceptible to Silence and Transform effects. When playing Hakkar, the player should have an immediate way to activate his Deathrattle. This can be done with the Twig of the World Tree, Reckless Experimenter, Dreampetal Florist, or have other minions gain its Deathrattle to ensure that the player has multiple tries to pull off a combo; this can be done with Da Undatakah, though if it has been transformed, it has not died and hence Da Undatakah will not gain its Deathrattle.

Since it's easier to draw your own cards than it is to force your opponent to draw, one way to create lots of blood is to draw cards over multiple turns then use King Togwaggle to pass the blood over to your opponent. You can also combine this with Naturalize, forcing them through one cycle of blood. Done carefully, this will kill them before they have a chance to swap back. Note that you need high health to survive filling your own deck with blood first.

After the player successfully activates Hakkar's deathrattle, the Corrupted Blood in the player's own deck can be neutralized with Hemet, Jungle Hunter, Explore Un'Goro, Prince Liam, Arch-Villain Rafaam or Archivist Elysiana. Skulking Geist will negate Hakkar's Deathrattle from both players, not just yours, so it is not recommended to use it.

Milling a Corrupted Blood by overdrawing will negate its effects, which means you can counteract it by keeping your hand full. As long as your hand is full when you end your turn, it's possible to wait it out until all copies of Corrupted Blood in your deck are removed. This is especially relevant in fatigue matches where both players are running out of resources.

Hakkar the Soulflayer, the Blood God, is a malevolent and destructive loa notably worshipped by the Gurubashi trolls, and known in the troll pantheon as the Loa of Blood. He at one point controlled the Gurubashi Empire's fallen capital of Zul'Gurub.

Hakkar the Soulflayer was the final boss of the Zul'Gurub raid until it was removed with patch 4.0.3a and Zul'Gurub was turned into an ordinary subzone of Northern Stranglethorn. Though the world believed Hakkar to be dead, there were rumors that the god might return one day. These ultimately proved true, when the troll Jin'do brought back his spirit in order to drain the blood god's powers into himself.

Hakkar's blood is very potent. A small amount of his blood obtained by Jammal'an the Prophet was injected into green dragons to use their bodies to produce the massive quantities of blood necessary to summon Hakkar into the world through a dark ritual that was thwarted by a group of heroic Alliance adventurers assaulting the temple. Farmed like livestock, the evil that grew within them was then harvested. Hakkar's blood had devastating effects on the dragons. These former jailors of the Atal'ai were corrupted by its presence in their bodies and became creatures of Nightmare. Even Eranikus, one of the greatest green dragons, infused with the largest quantities of blood, became twisted beyond imagination.

In the story of Rastakhan's Rumble, Hakkar shows up to "crash the party" even though he's "not invited".[4] The Soulflayer's use of Corrupted Blood in Hearthstone is in reference to the Corrupted Blood incident that occurred when players first faced Hakkar as a raid boss in the original Zul'Gurub instance in Classic World of Warcraft. During the boss encounter, Hakkar would afflict players with a debuff called "Corrupted Blood", which would cause them to take damage every few seconds and which could spread to other players who were simply standing in close proximity to an infected player. The disease was intended to remain confined to Zul'Gurub, but a technical oversight allowed hunter and warlock players to spread the debuff to the outside world by intentionally allowing their pet or demon minion to become infected, dismissing the pet (thus pausing the duration of the debuff), and then resummoning it outside Zul'Gurub, particularly in capital cities where many players congregated. The debuff began to quickly spread from player to player, instantly killing low-level players and making popular cities virtually uninhabitable. The plague persisted until Blizzard patched the debuff so that it could no longer exist outside of Zul'Gurub. However, player response to the event was oddly positive, leading to Corrupted Blood becoming one of the most well-known events in World of Warcraft history, and university researchers studied the event as an example of how real-world pandemics might spread.

According to lead mission designer Dave Kosak, Hakkar's inclusion in Rastakhan's Rumble was an obvious choice:

"If we were going to do a set that really explored trolls and troll culture, very clearly we had to talk about loa. It's just such an important part of who trolls are, and it's also just a really fun dynamic idea to play with. So you can see with our cards, our champions and our loa and their spirit cards that are associated with them, are a big part of the set. But if we're gonna talk about loa, then probably the one that players from World of Warcraft know the most would be Hakkar.
"Hakkar led to one of the most studied events in World of Warcraft history when the Corrupted Blood spilled out of the raid encounter and infected the servers. The Centers for Disease Control, I believe, studied this event as a simulation of an actual outbreak, which is amazing. So obviously we wanted to have that. Hakkar is just sort of one of the big bads in troll lore. Even the threat that someone would summon or bring back Hakkar was so scary that trolls from around the world arrived to put a stop to it.
"That was very exciting for us. So we knew it had to have a prominent place in our set, and that's one of the reasons why we made it one of our neutral legendaries, so everybody can have a little bit of fun with the Soulflayer."[1]

When it came to implementing Hakkar in Hearthstone, the developers tried several different versions. According to game designer Peter Whalen, Hakkar was one of the cards that went through the largest amount of different iterations during the development of the expansion,[5][6] probably the second most after Zul'jin.[6]

The first iteration had Hakkar corrupt a minion which would die at the end of the controlling player's turn and spread the corruption effect to all other minions, which would in turn die as well and keep spreading the plague. However, this quickly became exploitable since as long as one player could summon a minion every turn, neither player could progress the game.[1] Another version corrupted all other minions, causing them to die at the end of turn without the spreading effect. Another version caused the player to take control of any enemy minions that Hakkar killed. Yet another iteration permanently disabled the opponent's Hero Power for the rest of the game, but this effect was found to be overly punishing for the opponent.[6] The developers subsequently tried various ideas based on some of Hakkar's other abilities from his World of Warcraft boss encounter. However, they found that when they asked people what they thought of when they thought of Hakkar, the answer was always Corrupted Blood, and so the developers especially wanted to focus on that aspect of the character.[1]

Elaborating on why the team likes Hakkar, Dave Kosak explains:

"Something we really like about it is, first of all summoning the card has that kiss/curse element. You're summoning something terrible and it's also got a consequence you've got to deal with. But also, in the same way that players intentionally spread the Corrupted Blood to cities just to cause havoc [in Warcraft], it's that idea of you look at this card and as a player, you think to yourself, how can I take advantage of this?
"Am I going to play a rogue and destroy my own deck so I get rid of it? Am I going to destroy my opponent's deck and then shuffle in the Corrupted Blood so they're dead instantly? You begin immediately mapping out degenerate ways you can take advantage of this mechanic, which we think is really fun."[1]

Initial designer Liv Breeden further points out that Hakkar also creates interesting gameplay if he appears in a game through random effects, as he can force both players to suddenly have to deal with having Corrupted Blood in their deck.[1]

Hakkar's card art also went through several iterations. With Hakkar being a "uniquely weird" serpentine creature with wings and blades in place of hands, the team wanted to find the best way of displaying all of Hakkar's various elements and show off as much of the loa as possible. Dave Kosak emphasizes that most of the iterations primarily consisted in finding the right pose and finding a way to have the card art look menacing while still containing all of the various visual elements that call attention to the Soulflayer.[1]