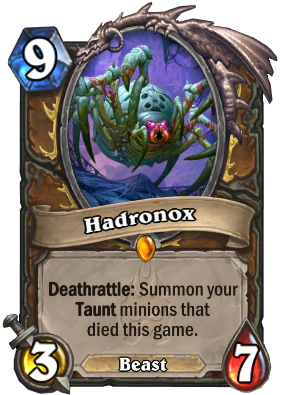 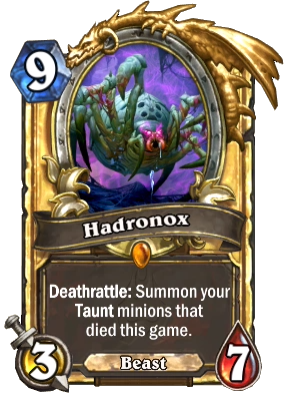 The viziers of Azjol-Nerub released Hadronox as a last-ditch effort to hold back the Lich King. They did so by VERY carefully scooping him up in a LARGE newspaper and releasing him.

Hadronox is a legendary druid minion card, from the Knights of the Frozen Throne set.

Hadronox can be obtained through Knights of the Frozen Throne card packs, or through crafting.

Hadronox has the potential to generate an insane amount of value off of its Deathrattle. While using it in a Taunt heavy deck is an option, maximizing its value by using it in a deck with a few high-cost Taunt minions like Primordial Drake and The Lich King is more preferable. As a Deathrattle minion, it can be resummoned with N'Zoth to double the Taunt minions revived.

Hardronox's biggest downside is that not only does it do nothing when played and has very low Attack, its high Health makes it difficult to kill off.

As a Beast, Hadronox fits in excellently in decks with additional Beast synergy. Menagerie Warden has fantastic synergy with Hadronox; one Hadronox dying will spawn multiple Taunt minions, keeping the other Hadronox alive until your other Taunt minions are destroyed. At that point you can intentionally get your second Hadronox killed, once more flooding your field with Taunt minions. Additional Beasts with Taunt that synergize with both Menagerie Warden and Hadronox are Druid of the Swarm, Druid of the Claw and Shellshifter; all three transform into Beasts upon summon and all three synergize well with Fandral Staghelm.

Naturalize lets you kill Hadronox immediately for instant value, but it comes at the cost of giving 2 cards to the opponent.

Multiple Hadronoxes can be summoned using Witching Hour and Carnivorous Cube, allowing for several uses of Hadronox's Deathrattle. This combo requires your deck to run no other Beasts however, preventing the use of Spreading Plague and Malfurion the Pestilent.

Extremely powerful Deathrattle for Da Undatakah as well. If he also gains Astral Tiger's Deathrattle, it creates an infinite use Hadronox.

Hadronox is a gargantuan spider and the second boss of the Azjol-Nerub dungeon.

From the World of Warcraft Adventure Guide
During the fall of Azjol-Nerub, nerubian viziers released a single spider that would one day grow to challenge the unyielding forces of the Lich King. Hadronox was instilled with a desire to avenge the fallen and reclaim its home from any that dare threaten it.