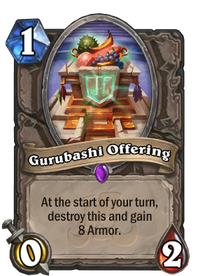 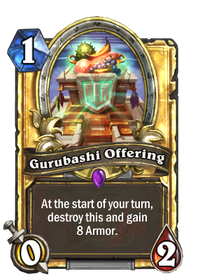 At the start of your turn, destroy this and gain 8 Armor.

For a limited time, loa blessings are on a pray-one-get-two deal (on selected sacrifices only).

Gurubashi Offering is a epic neutral minion card, from the Rastakhan's Rumble set.

Gurubashi Offering can be obtained through Rastakhan's Rumble card packs, or through crafting.

Due to its 0 attack and self-destruction mechanic, it offers no value for attacking.

It seems that gaining 8 Armor with cost of 1 mana and 1 card is a good deal, but if played at the wrong moment, this may only absorb 2 damage, being even worse than Shieldbearer.

It hasn't been seen in any Constructed decks, and is also an unacceptable card in Arena.