This article is using {{Card template}}.
See Help:Style guide/Card for how to edit this kind of article.
Edit this article
Gurubashi Berserker
768 • EX1_399
Regular 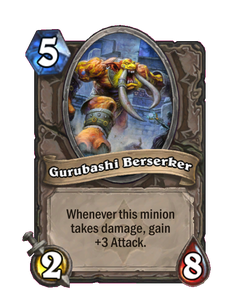 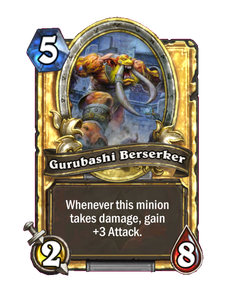 No Pain, No Gain. 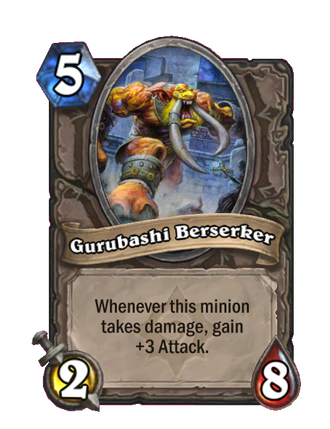 Gurubashi Berserker is a neutral minion card, inducted into the Legacy set, formerly from the Basic set. 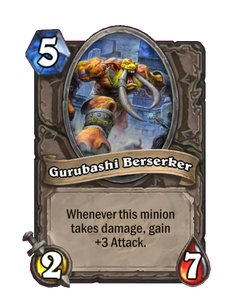 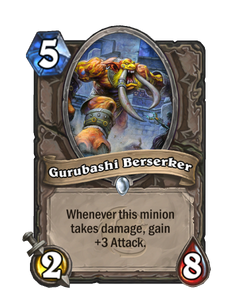 Regular and golden Gurubashi Berserker are uncraftable and cannot be crafted or disenchanted.

Two copies of regular Gurubashi Berserker are obtained for raising sum of all your class levels to 1.

Two copies of golden Gurubashi Berserker (Core) are obtained for winning 500 games across all classes.

Gurubashi Berserker (Core) is uncraftable and cannot be crafted or disenchanted.

This 2/8 minion for 5 mana has a very interesting ability. Since he gains +3 attack every time he takes damage he can become very powerful very quickly. Ideally use smaller source of damage to rapidly increase his Attack without weakening him too much.

Works very well in a warrior deck. If you can combo him with

Rampage and Charge you get a 16/9 minion with charge. It is a six-card combo (you need

The Coin, since the combination costs 11 mana) Mages can use

Fireblast to repeatedly increase his power, while priests can focus on increasing his Health through abilities such as

Divine Spirit in order to make him very resilient, leaving room for his Attack to reach astounding levels.

Since the Berserker's value lies in increasing its Attack, be aware that this will necessitate the minion becoming 'damaged', allowing for the use of abilities such as

Execute. It is also initially vulnerable to

Shadow Word: Pain. As a potentially high-power minion, be aware of any abilities your opponent may have to directly remove it from play or Silence it.

Note that healing the Berserker will not remove its Attack buff. Priests in particular can repeatedly heal a Berserker, maintaining its Health while allowing its Attack to steadily build.

Targeting a newly placed Berserker with

The Gurubashi are a fearsome tribe of jungle trolls who reside in Zul'Gurub, in the Eastern Kingdoms.