This article is using {{Card template}}.
See Help:Style guide/Card for how to edit this kind of article.
Edit this article
Guff Runetotem
63227 • BAR_720
Regular 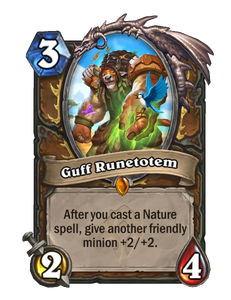 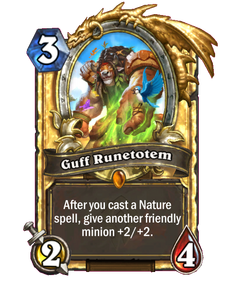 "By the twins above and twins below, our companions will lead us through." —Guff Runetotem 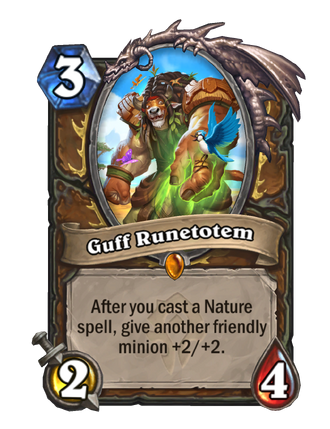 Guff Runetotem is a legendary druid minion card, from the Forged in the Barrens set.

A list of collectible Druid Nature spells in Standard can be found here.

Guff Runetotem is unique to Hearthstone as one of the ten mercenaries introduced in Forged in the Barrens.

Guff is the great-nephew of Archdruid

Hamuul Runetotem. Like others of his tribe, he embraced the beauty and power of nature; his awe for its majesty is as boundless as the natural realm. Guff once issued funeral rites to a grass clipping, and many assume he is weak and harmless, but his animal instinct will go wild if someone harms nature or his friends.

Guff’s family has never known quite what to do with him. Even among other druids he is perceived as soft and tender. In the hope of toughening him up, Uncle Hamuul sets him loose on the Barrens. Neither Guff nor the Barrens was ready for it…[1]

Amongst the four children Elise was guiding ~1m21s into the reveal trailer of Journey to Un'Goro (they salute her at the end) three resembled adult mercenaries later seen in the Forged in the Barrens set: the Tauren on the lower-right resembles Guff while the orc resembles

Varden Dawngrasp. After this was highlighted on Reddit,[2] Matt London initially replied to a "kids are all grown up?" question about this on Twitter stating it was non-coincidental, implying it was intended.,[3] but later the day in response to a reaction[4] stated he did not intend to confirm anything.[5]