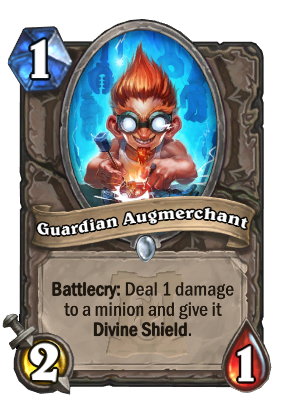 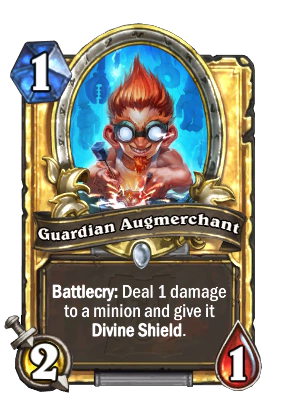 Battlecry: Deal 1 damage to a minion and give it Divine Shield.
Flavor text

"What doesn't kill you makes me money!"

Guardian Augmerchant is a common neutral minion card, from the Ashes of Outland set.

Guardian Augmerchant can be obtained through Ashes of Outland card packs, through crafting, or as an Arena reward.

An incredibly flexible minion that can be used for a ping, protecting a valuable minion, or favourable trading.

As one damage, Guardian Augmerchant is perfect for reclaiming the board in a tempo match up against a 1 health minion, such as Shadowhoof Slayer or Shimmerfly. Used this way, it's effectively an Elven Archer with one addition attack or a Blowgill Sniper at half the cost. It can also be used later to finish off weakened enemies. Do not use this card to remove Divine Shields however - it will simply reapply the Shield after removing it.

Like all Divine Shield-granting cards, the Divine Shield is best used proactively on a minion about to trade, letting it survive and giving you an additional 2/1. It can also be cast on a Taunt for extra safety, or any minion you want to make harder to kill. While the trade of one health for a shield that can be broken by 1 damage sounds bad, keep in mind the shield may force your opponent to waste their hero power or another damage source into a minion they could've otherwise cleanly killed.

Guardian Augmerchant can also combine both of its effects for even greater value. Enrage minions can be quickly triggered by this card, and given a Divine Shield to protect them. On-damage trigger effects like Bomb Wrangler and Acolyte of Pain can also be triggered, although the Divine Shield will absorb and negate a potential use of their effect. Warriors can use this card in conjunction with Execute to destroy any minion for 3 mana, since Execute will ignore the Divine Shield it grants.

Prior to release, this card was revealed[1] by Slyssa in her first ever Hearthstone card reveal; During the video, she refered to the uncanny (yet adorable) resemblence of the card art with RegisKillbin's hairstyle. RegisKillbin replied "...." in the comment, but later on gladly accepted this card as his "own card"[2].