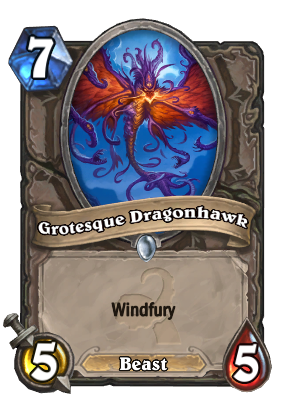 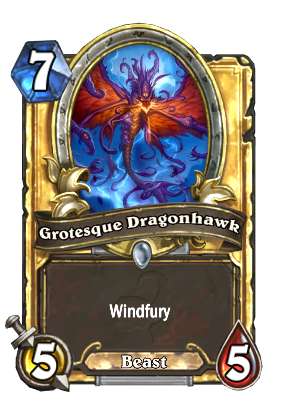 They say that "grotesque is in the eye of the beholder," but that's just because they've never seen a Grotesque Dragonhawk. Yikes!

Grotesque Dragonhawk is a common neutral minion card, from the Whispers of the Old Gods set.

Grotesque Dragonhawk can be obtained through Whispers of the Old Gods card packs, or through crafting.

Like most other neutral Windfury cards, Grotesque Dragonhawk has very low stats for its mana cost. This makes it a poor pick for your deck even in Arena play, but it remains relevant because cards like Tomb Spider can still generate it.

Compared to Stormwatcher, Grotesque Dragonhawk gains +1 Attack at the expense of 3 Health, making it a worse choice as a large-drop Windfury minion in most situations, unless Beast synergy is of utmost importance.

This is the corrupted version of Young Dragonhawk.