This article is using {{Card template}}.
See Help:Style guide/Card for how to edit this kind of article.
Edit this article
Grook Fu Master
40951 • CFM_666
Regular 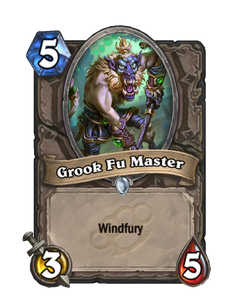 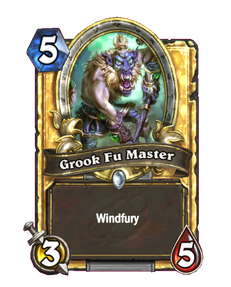 Grook Fu, the ancient Hozen art of bashing heads with a stick. 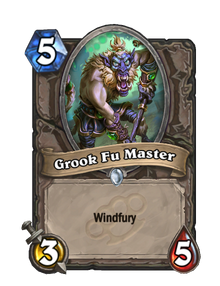 Grook Fu Master is a common neutral minion card, from the Mean Streets of Gadgetzan set.

If this minion survives its first turn on the board, its Windfury and relatively high Health can enable it to remove two cheap enemy minions and still survive for your enemy to deal with. However, its low Attack make this minion less valuable for face strategies or for dealing with big opposing minions.

Fantastic Firebird is a strictly better card, having both a cheaper cost and the useful Elemental subtype.

The hozen (sometimes known as hozu) are a monkey-like race that lives in Pandaria. Short-lived and immature, they are a passionate and playful race, mischievous pranksters that "act like a group of 14 year old boys running around together in the jungle." The hozen are native to Pandaria, and are found all over the continent.

Mostly a wild and independent race, hostile to any who wander into their hunting grounds, one tribe of forest hozen were befriended by the Horde after adventurers earned their grudging respect. Equipped with machine guns and weapons from the Horde, this hozen tribe were trained and recruited to join the battle against the Alliance and their new allies.

Many hozen are practitioners of martial arts, such as those used by the pandaren. Notable examples include Cloudbender Kobo, "The Monkey Monk", Master Boom Boom, "The Dynamite Monkey Monk", and two of the students of Tian Monastery: Ken-Ken and Zhi-Zhi. This particular hozen is ostensibly a master of "Grook-Fu", a martial arts style not previously known to exist in the Warcraft universe, but which is likely a uniquely hozen creation; "grook" is a hozen verb meaning "kill" or "hit".

One piece of hozen hai-pu states:

Art of Hozen-fu:
Grab, stab, and ookin bite it.
Repeat until win.