This article is using {{Card template}}.
See Help:Style guide/Card for how to edit this kind of article.
Edit this article
Grommash Hellscream
338 • EX1_414
Regular 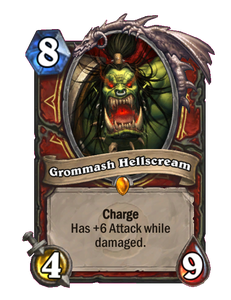 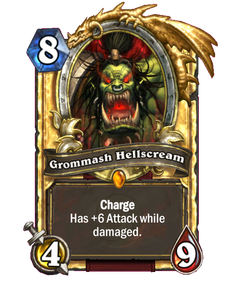 Grommash drank the tainted blood of Mannoroth, dooming the orcs to green skin and red eyes! Maybe not his best decision.

For the boss in Book of Heroes, see Grommash Hellscream (boss).

Grommash Hellscream is a legendary warrior minion card, inducted into the Legacy set, formerly from the Classic set. 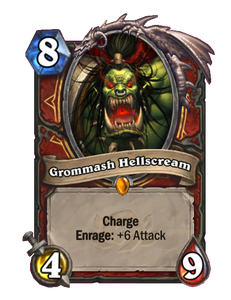 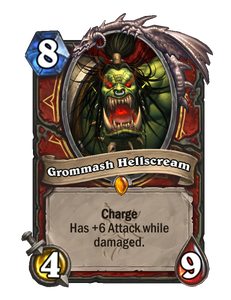 Grommash Hellscream (Core) is uncraftable and cannot be crafted or disenchanted.

A powerful combination can be used with the Inner Rage card from the warrior deck. This allows Grom to activate his enrage ability while only suffering one point of damage; effectively makes him a 12 / 8 minion. Effects such as Whirlwind and Cruel Taskmaster can also be useful for this.

A classic warrior finishing combo is to play Grommash followed immediately by Cruel Taskmaster or similar, allowing him to instantly deal 10-12 damage. In the absence of Taunts, this can be a very effective closing play. Even if it is not enough to finish the opponent outright, Grommash's high Health gives him a good chance of surviving subsequent turns, threatening another burst of damage unless the opponent can remove him. Grommash is generally far more valuable when played in combination with a source of damage, and warriors will usually hold the card until they have such a combo in hand.

Grommash's high Health also allows him to activate his enrage more frequently than other cards, which in turn makes him almost unstoppable as an attacker, despite the fact that he looks like a defender at first glance. The charge is also very useful on top of the enrage, allowing him to be used as a bomb to end the game, or a card to surprise your enemy and kill their favorite minion, or even turn a game around if you are careful.

Prior to enragement, Gromm's 4 Attack makes him a particularly tricky opponent for priests to deal with, offering immunity to both Shadow Word: Pain and Shadow Word: Death, although Shrinkmeister, Reversing Switch, or Crazed Alchemist can be used to bring him within range of one of the spells. Once enraged, if the priest lacks the tools to remove Grommash outright, Lesser Heal can be used to deactivate his enrage, buying the priest some time to draw counters such as Mind Control. If the priest has no minions on the board, the warrior may lack the tools necessary to re-enrage Grommash, significantly reducing his damage output. The same strategy applies to other healing effects, such as Voodoo Doctor or Earthen Ring Farseer.

Grommash "Grom" Hellscream was the chieftain of the Warsong clan, and best friend and chief advisor to Warchief Thrall. He was the first orc who drank the blood of Mannoroth the Destructor, thus binding the Horde to the Burning Legion — and he would eventually pay the ultimate price to free himself and his people from the curse.

"Grommash" means "The Giant's Heart" in orcish. Grom, a powerful blademaster, was the best friend and adviser of Thrall, so much so that Thrall considered him a brother. They would eventually fight against the demonic entity that bound the orcish race to slavery: Mannoroth. The two orcs won, but at a terrible price; Grom's life. He lies buried in Ashenvale, in the area now known as Demon Fall Canyon, which is near the site where he and Thrall destroyed Mannoroth. In memory of him is Grommash Hold, in Orgrimmar, as well as the Grom'Gol Base Camp in Stranglethorn Vale. Just outside Grommash Hold is Mannoroth's armor, complete with axe-hole, with a plaque dedicated to Grom. His axe, Gorehowl, was long held by his son and heir, Garrosh.