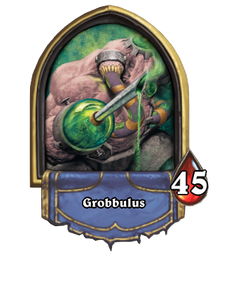 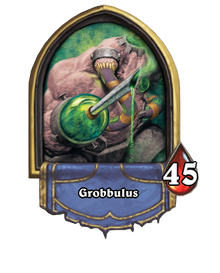 Grobbulus is a boss found in the Curse of Naxxramas adventure. He is the second boss of the adventure's fourth wing, the Construct Quarter. 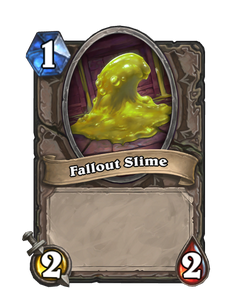 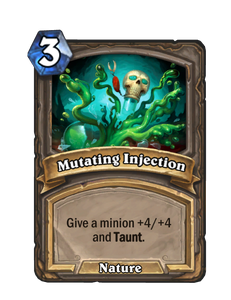 Unlike the other bosses in the adventure, Grobbulus always goes second, and therefore always starts with The Coin.

Update: With Blackrock Mountain, the fight can be made much easier with the use of Grim Patrons, due to their interaction with Poison Cloud (Heroic). Note that the below strategies were written prior to Blackrock Mountain, and so do not take this minion into account.

Regardless of the deck used, or the version of Grobbulus encountered, the key to this fight is surviving and removing buffed Echoing Oozes.

The general rule of thumb is to keep the deck free of any minions you do not want Alarm-o-Bot to put into play. Battlecry is completely ruined when a card is moved from your hand into the field, and minions that have 2 Health -- but no Charge -- will die on Grobbulus' turn. Alarm-o-Bots can often be played out safely even with several opposing minions out; the player is frequently considered the greater threat.

Include the maximum number of the following cards in the deck: Innervate, Alarm-o-Bot, minions with game-tilting abilities, less-expensive cards that keep you alive.

Good examples of life-preserving cards include: Naturalize, Mark of the Wild, Power of the Wild, Healing Touch, Mark of Nature, Swipe.

While Northshire Cleric may seem like a liability at 3 HP, it proves to be the best card for the starting hand. Grobbulus has many small removal cards that are aimed square at your Turn Three Stoneskin Gargoyle, and the Cleric will fish those out. Heal her on Turn Two, but do not trade with an early Loot Hoarder -- Grobbulus will do that for you and deny itself a slime in the process.

A true mistake would be to include Lightwell. With the damage your army takes due to the hero ability, Lightwell rarely targets you or your most important minion.

The ultimate goal is to get a Gargoyle out and make it gi-normous. All of Power Word: Shield, Divine Spirit, Dark Cultist, and Temple Enforcer contribute towards this end. Do not stop buffing one Gargoyle until it is at least seven health; Heroic Strike can kill it on any turn otherwise. Inner Fire at six health will contend with every threat Grobbulus tries to make. Keep the second Gargoyle in hand as a backup or, if Gargoyle Prime is endangered, play number two with no (or few) buffs to act as a removal magnet.

Other minions are disposable wingmen to your Gargoyle. Spellbreakers should be hurled at Abominations a turn after they silence an injected Echoing Ooze. Don't bother healing Lightspawn, unless +2 attack trades favorably or provides lethal.

One last card for consideration is Shadow Madness. It falls just shy of 'good' due to Echoing Ooze, which is both incapable of killing its twin, and frequently-immune due to buffs. It is still quite effective against Loot Hoarder and Sludge Belcher, however. If you do not have Madness, have Earthen Ring Farseer plead insanity on your behalf. 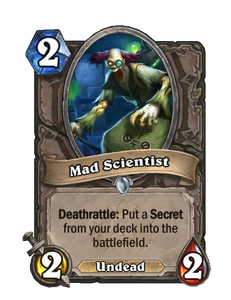 Kel'Thuzad
Grobbulus is my prototype for an ARMY of giants. You are test subject one.

Grobbulus lurks deeper in the Construct Quarter, carrying the same ooze that flows through Naxxramas within its hulking form. Grobbulus is a flesh giant, the first successful one of its kind, created to build a formidable army capable of quickly spreading the undead plague. One of Grobbulus’ limbs has been replaced with a syringe, which it uses to inject the plague slime of Naxxramas into its enemies.[1]

"Grobbulus, the first of what was to be an army of flesh giants. It carried the plague slime of Naxxramas within its body, injecting the living ooze into the bodies of its foe. The recipient of this foul injection would usually flee to his allies, bringing them down with him."
- Commander Eligor Dawnbringer

"Grobbulus: He was mild mannered until he lost his family and friends. They were all balloons."[2]