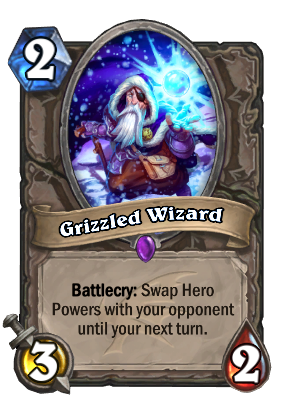 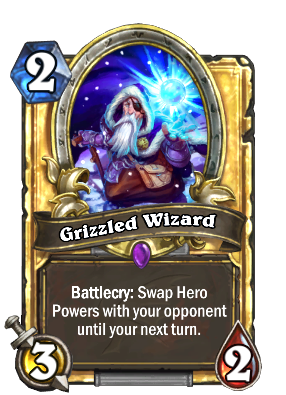 Battlecry: Swap Hero Powers with your opponent until your next turn.
Flavor text

When he was young, he was an Outrageous Magus.

Grizzled Wizard is an epic neutral minion card, from the Descent of Dragons set.

Grizzled Wizard can be obtained through Descent of Dragons card packs, or through crafting.

The main use of Grizzled Wizard is ruining an opponent's powerful hero power by replacing it with a much weaker one. Solid targets are any of the Quest hero powers introduced in Saviors of Uldum or Hero card hero powers. For a list of alternate hero powers, see Hero Power#Player Hero Powers. Easy ways to switch include Shadowform, Sir Finley Mrrgglton, Dinomancy, Charged Hammer, and Sideshow Spelleater. Untapped Potential is another choice, since non-Druid opponents will be totally unable to use Ossirian Tear.

In Wild, you can permanently grant your opponent any hero power by playing Grizzled Wizard followed by Sideshow Spelleater.

Grizzled Wizard can also be used as a temporary combination of Sideshow Spelleater and Mindbreaker, granting you access to one use of your opponent's hero power and preventing them from using theirs for a turn.

Attack
Get out of my city!