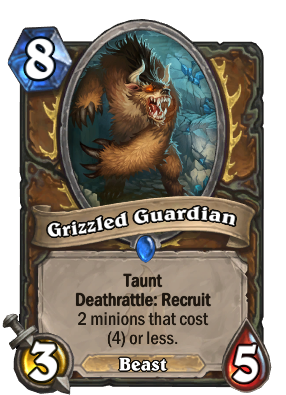 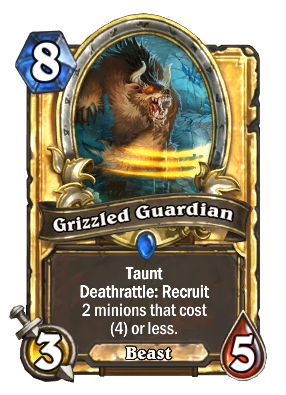 Grizzled Guardian is a rare druid minion card, from the Kobolds & Catacombs set.

Grizzled Guardian can be obtained by:

With both Taunt and a powerful Deathrattle, as well as the Beast subtype, Grizzled Guardian can work well in a deck focused around Hadronox, N'Zoth, the Corruptor, Beast synergy or even all three. Good minions for Grizzled Guardian to Recruit are those with persistent effects (such as Fandral Staghelm or Spiritsinger Umbra), Taunt (such as Crypt Lord or Infested Tauren), those with Deathrattles (such as Arfus or Bloodmage Thalnos), those with negative Battlecries (such as King Mukla or Millhouse Manastorm) or perhaps fellow Beasts (such as Enchanted Raven or Vicious Fledgling).

Based on its horns and the shape of its ears, Grizzled Guardian is a tauren druid in Bear Form.