This article is using {{Card template}}.
See Help:Style guide/Card for how to edit this kind of article.
Edit this article
Grimestreet Smuggler
40743 • CFM_853
Regular 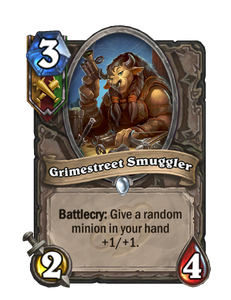 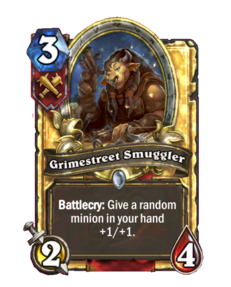 She's got anything you want. Need the latest derpinger? No problem! 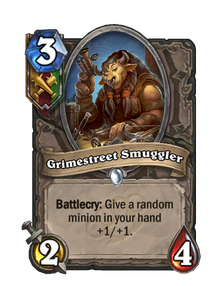 Grimestreet Smuggler is a common tri-class minion card, from the Mean Streets of Gadgetzan set.

As a card that is slightly understatted for its cost and compensates for this by adding stats to a future card, this card fits very well in mid-range and control decks, but is a poor choice for aggro decks.

Not being able to control which card the battlecry lands on is a drawback. Ideally, you want to buff cards like Rat Pack or Dispatch Kodo, and not your Doomsayer.

Summon
What? They fell off a truck.

The Grimestreet Smuggler's diminutive gun is called the "Derpinger". The barrels of the gun itself are easily overlooked since they are dwarfed by the substantial scope, itself surmounted by a simple gun sight, to make sure "no shots are being missed". Despite its size, the Derpinger "packs a hell of a punch".[1]