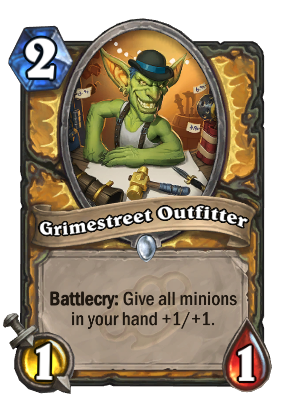 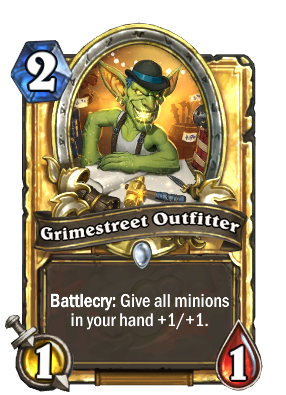 Battlecry: Give all minions in your hand +1/+1.
Flavor text

If you bargain hard, he'll throw in the hat.

Grimestreet Outfitter is a common paladin minion card, from the Mean Streets of Gadgetzan set.

Grimestreet Outfitter can be obtained through Mean Streets of Gadgetzan card packs, or through crafting.

This card is a strong choice for decks built around the "handbuff" effect, or in Arena (where decks typically contain more minions than spells or weapons). Playing this on turn 2 while holding several minions will give you a big value advantage in the follow-up turns.

Summon
Accidents. They happen, you know?

"Dis is my favorite part of being a Goon! We get the guns. And when I say guns, I mean the BIG guns, includin’ some very choice engineering.

Grapplehammer is a talented guy, and his people dole out upgraded gear through the city’s pawn shops. Basically, Goons stick together and we got all the best toys, so you ain’t never gonna get into a fight without some back up. Even the littlest guy can be a heavy hitter with the right pea-shooter in da violin case.

Us Goons always try to smuggle in some hardware before we get into a brawl. So, here’s how that works. When a fellow Goon is played, they’ll make arrangements for their back-up to get some of the weapons we stashed in Gadgetzan. That can come in the shape of some very beefy buffs to the minions in your hand. Just wait ‘til you get a load of the goods in Don Han'Cho's private stash!"[1]