This article is using {{Card template}}.
See Help:Style guide/Card for how to edit this kind of article.
Edit this article
Grimestreet Enforcer
40469 • CFM_639
Regular 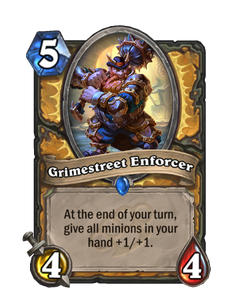 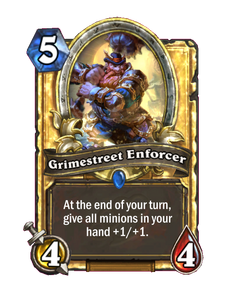 "Sir, you don't have a permit to park your mount here." 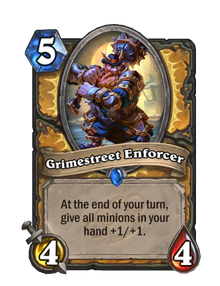 Grimestreet Enforcer is a rare paladin minion card, from the Mean Streets of Gadgetzan set.

The hand buffing mechanic of the paladin class affects all minions in the player's hand, so it makes sense to have several minions in hand when this minion is on the board to gain more value. Small minions such as Argent Squire or even Shieldbearer benefit greatly of the health and attack bonus, making the card effective in combination with drawing cards such as Divine Favor or Small Time Recruits.

With the effect being triggered at the end of each of your turns, Grimestreet Enforcer can buff your minions more than once. It is therefore a good strategy to protect him behind a minion with Taunt or buffing the Enforcer itself either by hand buffing or spells like Hand of Protection.

The effect only buffs minions, so it makes sense to only run a few weapons and spells in your deck. Minions that synergize very well with increased attack and health are minion with Divine Shield or minions with effects that are dependant on their attack value. Those minions include Meanstreet Marshal, Wickerflame Burnbristle, or Fight Promoter.

Summon
You gotta pay up.