This article is using {{Card template}}.
See Help:Style guide/Card for how to edit this kind of article.
Edit this article
Grim Patron
2279 • BRM_019
Regular 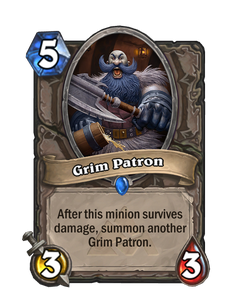 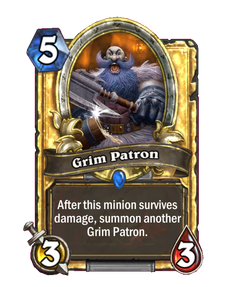 If you love getting your face punched, come to the Grim Guzzler! 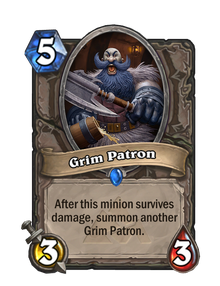 Grim Patron is a rare neutral minion card, from the Blackrock Mountain set.

Grim Patron serves as the centrepiece of the Patron Warrior deck, with various activating cards used to repeatedly damage the Patron, causing more Patrons to be summoned. Efficient trading and synergistic effects can result in good board control, allowing the warrior to deal overwhelming face damage from their army of Patrons. It can also generate good card advantage, leading to a potential win condition in itself.

This can be a very sticky minion since his 3 Health will allow him to survive most AoE damage and spawn another copy. This can make it so that the opponent has to deal with this minion first using one of their bigger minions or spells. Grim Patron provides value either through trading with enemy minions, or through passively providing additional Patrons by surviving damage. To make the most of the minion, combine it with trading and synergistic effects like Whirlwind and Revenge to simultaneously clear the opponent's board and develop your own.

Good Grim Patron play can create strong board control, but no matter how many Patrons the warrior gains they can still be removed through AoE like Flamestrike. The main challenge to the opponent is removing the Patrons without creating more. This is best achieved through powerful AoE damage or destroy effects, but is possible one by one. Small minions are a liability when playing against Grim Patrons, and the Patron player should trade into them as often as possible to create more Patrons. Note that the 7 minion limit means that with a full board no more Patrons will be summoned by the effect, allowing the opponent a little more room to deal with them.

Mages can damage friendly Grim Patrons using Fireblast in order to constantly have a minion on the board, allowing them to quickly overwhelm the opponent if the Patrons are not dealt with.

If the conditions are satisfied, Defile will trigger up to its maximum limit of 14 times, often leaving a board full of Grim Patrons for a warlock.

Summon
A fight, count me in!

Effect triggering
Everyone, get in here!

Grim Patrons can be found at the Grim Guzzler in Blackrock Depths. They are initially neutral, but will become hostile (along with all other mobs in the bar) if Plugger Spazzring is killed or has Grim Guzzler Key pickpocketed from him.

Grim Patron was voiced by Darin De Paul, who also voiced cards including Rend Blackhand, Axe Flinger and Baron Geddon, as well as the character Reinhardt in Overwatch.