This article is using {{Card template}}.
See Help:Style guide/Card for how to edit this kind of article.
Edit this article
Grim Necromancer
42438 • ICC_026
Regular 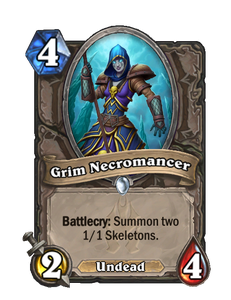 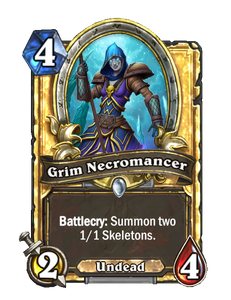 WARNING: Skeletons will NOT explode. 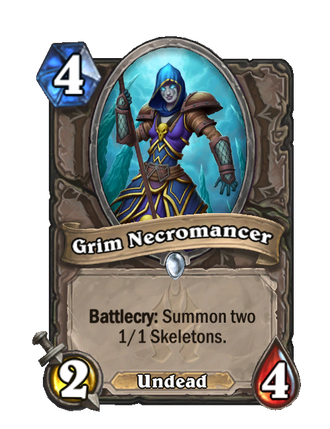 Grim Necromancer is a common neutral minion card, from the Knights of the Frozen Throne set. 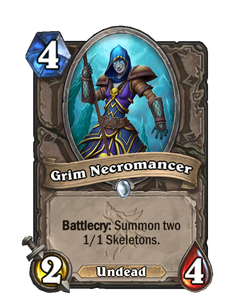 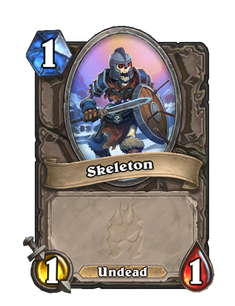 Dragonling Mechanic, exchanging 1 attack (and the Mech tribe) for an extra minion. This minion provides 4/6 in stats for 4 mana, split between 3 bodies. The multiple minions make great targets for

Power of the Wild, and fit well into Zoo decks.

Frost Lich Jaina's hero power can be used on the 1/1 skeletons to summon 3/6 water elementals as a late game resource.

Necromancers are practitioners of necromancy (also called the dark arts or the black arts), the study and use of magic to raise and control the dead. Necromantic magic (or death magic) has many functions beyond simply raising the dead. Masters of this tainted field of magic can conjure festering diseases, harness the shadows into bolts of incendiary energy, and chill the living with the power of death. Necromancy can also be used to reconstruct the flesh of undead creatures, allowing them to function again even after the foul monsters have been destroyed. Necromancers are the enemies of life itself, and all hands are raised against them. Some of the worst evils in Azeroth's history have been perpetrated by necromancers, and they deserve their malevolent reputation. Few things are as abhorrent and horrifying as necromancy.