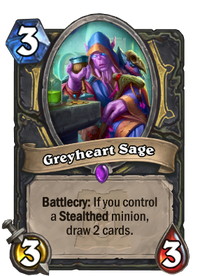 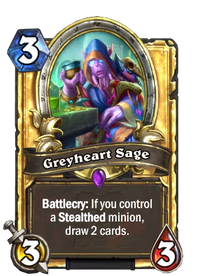 "What am I drinking again?"

Greyheart Sage is an epic rogue minion card, from the Ashes of Outland set.

Greyheart Sage is a strong source of card draw in decks that can reliably fulfill its condition. Good minions to play on curve with Greyheart Sage include Spymistress, Skyvateer, and Worgen Infiltrator. With The Coin or patience, Akama is also a good choice. This minion can be used in either tempo decks for refueling, or combo decks as an efficient way to dig for combo pieces.

This minion has some anti-synergy with Ashtongue Slayer, since the Slayer requires a Stealth to attack while the Sage requires a minion to remain in Stealth. In tempo decks, you need to decide whether you need more damage or more card draw in your current match-up.

The Greyheart are a tribe of Broken draenei loyal to Illidan Stormrage. They inhabit Serpentshrine Cavern in Coilfang Reservoir and fight alongside the Coilfang naga.