For the minion of the same name, see Greybough.

Greybough is a hero that the player can pick in the Battlegrounds game mode. 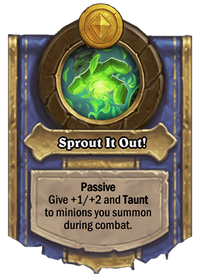 With Greybough you generally want to use a minion type which tends to spawn more minions during battle, such as Beasts or Mechs. Khadgar (and Baron Rivendare) are considerably more powerful than normal; summoned minions gain taunt, so non-taunt minions that summon other minions are more likely to die before Khadgar does. Minions that trigger effects when taunt minions are attacked are particularly powerful with Greybough: Arm of the Empire can give your summoned minions +2 Attack when attacked; Qiraji Harbinger gives your board gets an additional +2/+2 or +4/+4 whenever a minion summoned in combat dies; Champion of Y'Shaarj will be able to be buffed considerably more each battle, as your board will often be full of taunt minions.