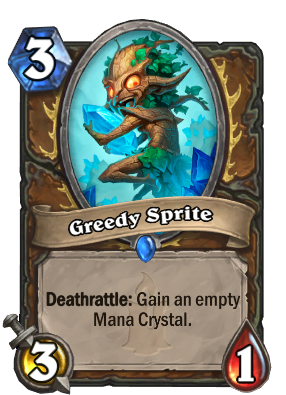 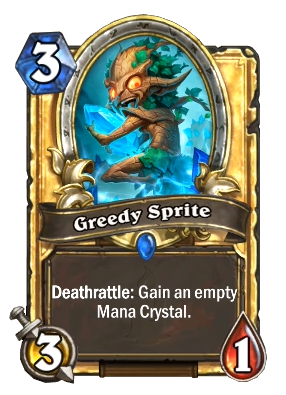 Sparkliest of the seven deadly sprites.

Greedy Sprite is a rare druid minion card, from the Kobolds & Catacombs set.

Greedy Sprite can be obtained by:

Being basically an aggressively statted minion with Wild Growth attached to it, Greedy Sprite can be used in an aggressive/ramp type of deck.

Sprites are small, mischievous nature spirits found in Pandaria, on the Wandering Isle, and in Val'sharah.

Mischievous and prevalent, the nature sprites of Pandaria resemble the prevalent features of their surroundings, like shrubs or rocks. Their appearance allows them to easily hide and engage in their favorite pastime – playing tricks on others for inscrutable reasons. Many forest sprites' pranks – disguising themselves as stools to trip people, or throwing fruit and nuts at wanderers – seem harmless. Mountain spirits' means of interaction tend to have a higher incidence of violence and death, involving rockslides and falls off cliffs.

Rumor has it that more deadly, unique varieties of sprites have emerged in sha-tainted areas. If sprites' behavior is simply a reflection of the environments that surround them, any such creatures must be monumentally dangerous.

Plant-like sprites are really just living plants and will resprout later if killed. The needles of the needle sprites that dwell in Kun-Lai Summit can be used in a special acupuncture technique to purge poison.

Sprites shroud themselves in illusion to avoid detection. It is a little-known secret that the dust sprites use for their various tricks have restorative properties.