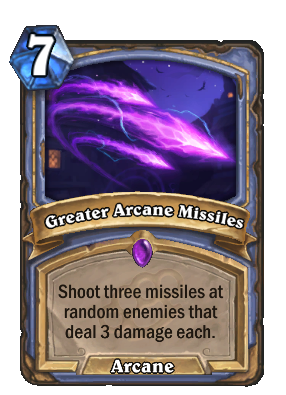 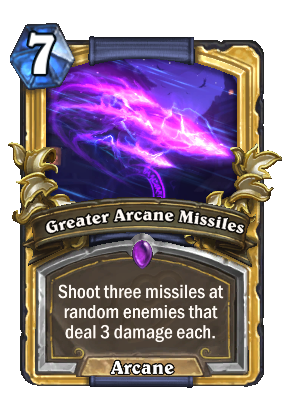 Wow, and I thought Arcane Missiles was great!

Greater Arcane Missiles is an epic mage spell card, from the Mean Streets of Gadgetzan set.

Greater Arcane Missiles can be obtained through Mean Streets of Gadgetzan card packs, or through crafting.

This spell shoots 3 missiles, each one dealing damage to a randomly selected enemy character:

Its very high cost compared to the "regular" Arcane Missiles suggests that is meant to played with Inkmaster Solia, or another cost reduction effect like Emperor Thaurissan. Otherwise this card will be unusable until Turn 7, by which point Firelands Portal provides much more value.

This card synergizes with spell power greatly, since spell damage is applied to each missile this means that spell power has effectively three times the effect. A +2 in spell power means this spell does 15 damage, 5 for each missile.