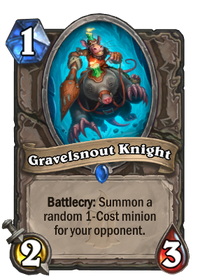 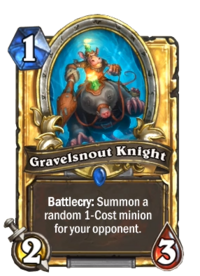 Battlecry: Summon a random 1-Cost minion for your opponent.

Gravelsnout Knight is a rare neutral minion card, from the Kobolds & Catacombs set.

Gravelsnout Knight can be obtained through Kobolds & Catacombs card packs, or through crafting.

Can be used to intentionally inflate the number of enemy minions, in order to activate Mind Control Tech's Battlecry. Similarly, it can enable spells that require at least two minions (Multi-Shot, Forked Lightning, Cleave).

Cabal Shadow Priest and Shadow Madness can be used to steal the 1 cost minion, turning this card's downside into a useful bonus effect.

The 1-cost minion can be a target for Bane of Doom, Raging Worgen or Stampeding Kodo.

The 1-cost minion may also present various minion type or ability synergies for the player to take advantage of. For example:

This card can also work against a mage's Duplicate: if the 1 cost minion is destroyed, the value of the secret is diminished. It can also be used as a tech card against Summoner Priest by adding weak minions to the resurrectable minion pool.

The below table lists all collectible 1-Mana minions available in Wild format, representing the range of Gravelsnout Knight's possible summons.

This card depicts a kobold riding a Dire Mole.