This article is using {{Card template}}.
See Help:Style guide/Card for how to edit this kind of article.
Edit this article
Grand Lackey Erkh
56135 • YOD_035
Regular 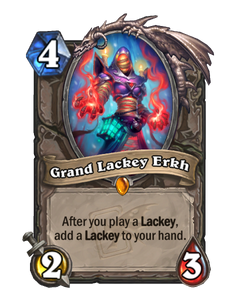 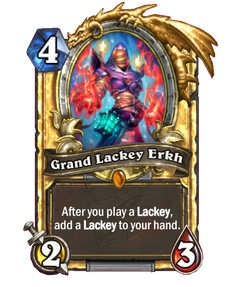 Dimensions: Full • 330 x 410px
Elite
After you play a Lackey, add a Lackey to your hand.
Flavor text 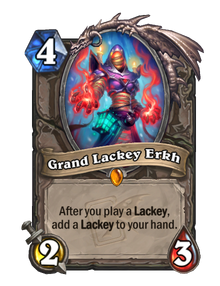 Grand Lackey Erkh's triggered effect generates one of the following cards at random.

Grand Lackey Erkh is a strong refueling tool for a Lackey-based deck. While slow, her effect can potentially cycle through the effects of four Lackeys on the turn she's played, generating spells, dragons, and powerful effects. She has the most synergy with Tempo Rogue playing Galakrond, the Nightmare, since this deck creates enough Lackeys to guarantee her effect. She also proves formidable when combined with Dark Pharaoh Tekahn, helping to fill your board with 4/4s.

Be conscious of both hand and board space when using Erkh. A handful of Lackeys add a card to the hand, which can quickly fill up space. Lackeys themselves take up space on the board, limiting you to six at a time without a way to reliably kill them off. Faceless Lackey will also exacerbate this issue. Goblin Lackey can lower this, but does require minions on your opponent's board.

Grand Lackey Erkh should almost never be played alone on the board, as her mediocre stats leave her exposed and easy for your opponent to kill. Titanic Lackey is Erkh's most reliable survivability tool, granting herself +2 health multiple times or creating a different taunt to protect her.

Grand Lackey Erkh is unique to Hearthstone. She is an ethereal working for League of E.V.I.L.