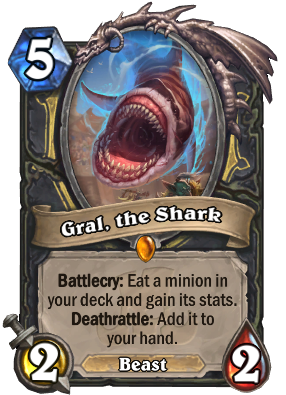 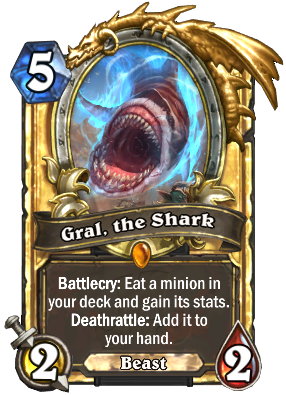 Battlecry: Eat a minion in your deck and gain its stats. Deathrattle: Add it to your hand.
Flavor text

Gral, the Shark is a legendary rogue minion card, from the Rastakhan's Rumble set.

Gral, the Shark can be obtained through Rastakhan's Rumble card packs, or through crafting.

Gral's effect is comparable to minions with a draw effect on Deathrattle like Loot Hoarder, but targets minions specifically and can be much more cost-efficient if a larger minion was targeted. It takes at least 3 mana's worth of stats to be on par for its stats. It generates even more value with Spirit of the Shark, taking the stats of two minions and drawing two cards. With Deathrattle activators like Necrium Blade, you can gain additional copies of the eaten minions immediately as well.

Extremely powerful if The Darkness is eaten, creating a 5-mana 22/22.

Beware that Gral is extremely susceptible to Silence and return to hand effects, which removes its stats and the cards it consumed.

Gral, the shark, is the loa of the sea. He is worshiped by the Zandalari, at his shrine of Atal'Gral in Zuldazar. The deep ocean is his realm and the darkest ocean is his domain. He is wise and takes a long view on things. Gral is quite powerful and when it comes to his knowledge of the sea, none can compare. He watches over every voyage.

Five years before the war in Zandalar, the naga tore down Gral's temple Atal'Gral and killed every last one of his followers. Gral was furious and anyone near the water could feel his pain as each follower fell. There was talk by the Zandalari of rebuilding the temple, but with Gral either missing or weak, it remained just talk.

The naga would return years later seeking secrets at the ruins of Atal'Gral, and Gral was awakened to combat them. Gral knew that the naga were dealing with darkness they could not comprehend and would soon become nothing more than a hollow tool to those who may answer. He could feel it beneath and around him, and so awakened from his slumber in order to defeat their local leader Summoner Siavass. Gral knew that Queen Azshara reached into a dark place from where she could not return, and vowed to tear her apart himself when the time came in revenge for his followers.

In Hearthstone lore, Gral serves as the patron loa of Gral's Sharks, the swashbuckling, cheating-prone rogue team in Rastakhan's Rumble.

Gral was not a subtle Loa. When he wanted something, he went for it, full force. He was a natural match for Captain Hooktusk and the bloodthirsty band of buccaneers she called a Rumble team. When it came to the Sharks, ruthless was a euphemism. They never played by the rules. Sometimes they’d even make up rules just for the pleasure of breaking them. Just before they broke their opponents.[5]