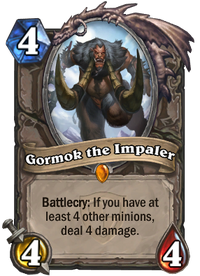 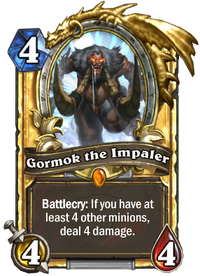 Battlecry: If you have at least 4 other minions, deal 4 damage.
Flavor text

Gormok has been giving impaling lessons in a small tent near the tournament grounds. For only 25g you too could learn the fine art of impaling!

Gormok the Impaler is a legendary neutral minion card, from the Grand Tournament set.

Gormok the Impaler can be obtained through The Grand Tournament card packs, or through crafting.

With slightly below-average stats for its cost, Gormok the Impaler should only be put in your deck if you plan to make use of its powerful but tricky to activate Battlecry. Best used with decks/classes that like to flood the board such as Warlock, Shaman, and Paladin. 'Sticky' Deathrattle minions can also help keep the board full. Gormok can be used with Brann Bronzebeard in a control deck as a strong finisher to deal 8 damage for 7 mana.

For Warlock, using Fiendish Circle or Rafaam's Scheme (assuming you held it for 3 turns) to easily activate its conditional Battlecry.

Gormok the Impaler is a Magnataur, held captive for battle in the Trial of the Crusader.

Magnataur are massive creatures that live in Northrend. They have the torso of a giant attached to the body of a mammoth; like the centaur and Keepers of the Grove, they are relatives of the demigod Cenarius. They are notoriously long-lived and rumored to engage in cannibalism when food is scarce. They are vicious, brutal, and uncaring; only the strongest and meanest survive. Despite their hostility towards all other races, they have become strangely tolerant of the arctic kobolds, who follow the magnataurs for safety and mutual benefit during hunts.

Magnataur live in prides, much like lions: one or two dominant males and several females along with their offspring.