This article is using {{Card template}}.
See Help:Style guide/Card for how to edit this kind of article.
Edit this article
Gorehowl
810 • EX1_411
Regular 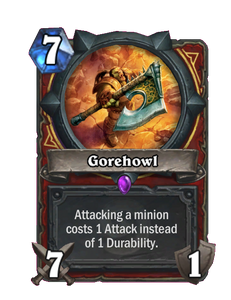 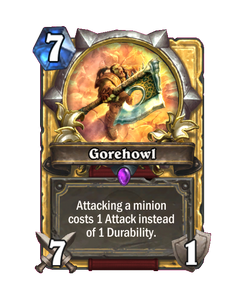 Grommash Hellscream's famous axe. Somehow this ended up in Prince Malchezaar's possession. Quite the mystery! 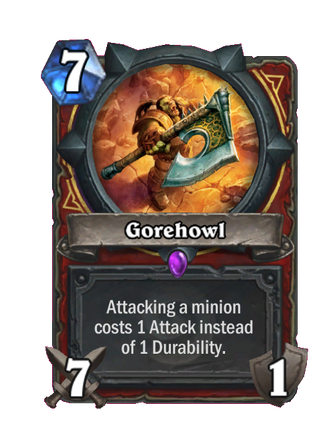 For the boss card in Book of Heroes, see

Gorehowl is an epic warrior weapon card, inducted into the Legacy set, formerly from the Classic set. 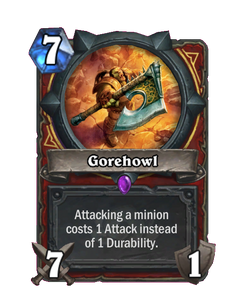 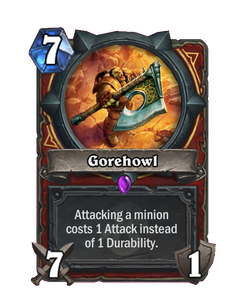 Gorehowl are obtained for raising warrior to level 9.

Two copies of golden Gorehowl (Core) are obtained for winning 250 games as warrior.

Gorehowl (Core) is uncraftable and cannot be crafted or disenchanted.

This card is best used to destroy minions. It is possible through the use of

Upgrade! and similar effects to increase its Durability, thus making it a useful weapon against enemy heroes as well.

A common mistake is to overlook the text, which only works while "attacking a minion". Attacking a hero with this weapon will cost 1 Durability as normal.

Gorehowl's special ability presents various strategies for making the most of the weapon. The greatest total damage can be achieved through attacking only minions for at least the first 6 attacks, followed by a 7th attack to any target, resulting in 28 damage in total. This allows for superb board control, even removing large minions, but will likely incur a heavy cost in damage received in turn by the warrior. Decks focused on tanking such as

C'Thun Warrior can help mitigate the damage incurred from attacking a powerful minion.

Violet Illusionist also combos well with Gorehowl by allowing you to trade with a minion without suffering any damage. Alternatively, it can be used a few times on minions, before dealing an attack of 3-5 damage to the enemy hero, sacrificing board clearing utility for face damage. This can be useful when there are no low Health minions to remove, or simply in order to allow another weapon to be equipped without wasting the remaining stats entirely.

Gorehowl can be a valuable asset for decks that make use of Pirates. The very high Attack of this weapon gives

Bloodsail Raider a huge Attack boost and allows for 0-Mana Dread Corsairs even after a few attacks. In particular,

Bloodsail Cultist's Battlecry essentially gives Warriors up to 2 additional Upgrades. Combine this with

Captain Greenskin and this can result in up to a 12/6 weapon, allowing the user to deal huge face damage each turn and capable of destroying even

Deathwing in one blow.

Besides destroying the weapon, you should anticipate the next total damage it can do to a minion. Place a divine shield or +1 health minion. For 7 damage, an 8-health, for 6, a 7-health etc. Your opponent will waste health and time while you go face or flood the board with more minions, whittling down Gorehowl until there's nothing left.

Gorehowl is the legendary two-handed axe of the Hellscream family of orcs. The weapon was famously wielded by

Grommash Hellscream, chieftain of the Warsong clan, and was later also held by his son and heir, Garrosh, Warchief of the Horde, until he discarded it in favor of an Old God replica.

Gorehowl was forged three generations before Grommash inherited it. Grommash's great-grandfather used Gorehowl to kill six legendary gronn. Their hearts were sealed into the blade, granting it untold strength.

When Golmash Hellscream, the father of Grom, was locked in the jaws of a giant gronn, he found the strength to stab Gorehowl into the gronn's eye and kill it alongside him. When they fell, it was the gronn who died first.

Grom Hellscream had been the first to partake of the Blood of Mannoroth, eventually coming to regret it. When

Thrall met him, it was clear to him that Grom had the means by which to liberate his lethargic brothers and sisters. After Hellscream again drank the Blood of Mannoroth in Kalimdor, in his hands Gorehowl was the weapon which slew the demigod

During the second coming of the Burning Legion, Hellscream took his axe to the pit lord Mannoroth after Thrall was beaten into unconsciousness. With a single blow, Hellscream cleaved his adversary's weapon in two and slew Mannoroth. Hellscream perished shortly afterwards, but he had managed to break the curse over his people, freeing their souls and spirits from the demonic curse forever. It seems that afterward, Gorehowl was retrieved by Thrall or the orcs of the Horde in general and kept in Orgrimmar.

Before the Shattering, Thrall himself gives Gorehowl to Garrosh, who wields it in the duel resulting in the death of

Cairne Bloodhoof. Garrosh wielded the legendary weapon wherever he went.

Garrosh left Gorehowl behind in the Vault of Y'Shaarj. It was discovered by

Jaina Proudmoore and Lor'themar Theron, although it's unknown what happened to it later.

The warchief replaced the original Gorehowl with an Old God replica of the weapon named Xal'atoh, Desecrated Image of Gorehowl.

In the alternate timeline, Grom used Gorehowl to kill Mannoroth after rejecting the demon's blood. Some time later, he appears to have given his Gorehowl to Garrosh; Grom was not seen wielding the axe in any of his subsequent appearances in Draenor, while Garrosh used it at Grommashar. Following Garrosh's death in his mak'gora with Thrall at the Stones of Prophecy, Gorehowl remained near his corpse where Thrall had deflected it.

Gul'dan retrieved Gorehowl and brought it to Grommash in another failed attempt to convince him to drink demon blood.

Gorehowl is a famous weapon. The sharply curved axe head, with an intricate series of grooves in it, is massive, well worn, and permanently stained with old blood. Its wickedly curved blade has two notches in it, and many small holes in the head near the handle. When swung, the notches causes the axe to "sing" its own battle cry, just as Grom once did, which gave the weapon its name. The skull on the blade is believed to be that of a slain goren. The leather wrap on the handle would have been made from clefthoof hides. When it wasn't held in Garrosh's hands, he hooked it onto a brace on his back.