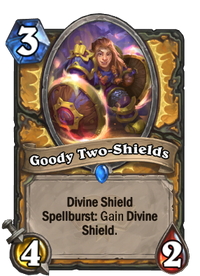 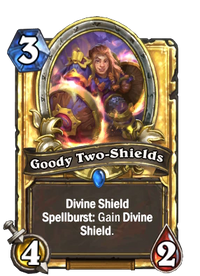 These are my shields. There are at least two like them, and both are mine.

Goody Two-Shields is a rare paladin minion card, from the Scholomance Academy set.

As a 3 mana 4/2 with Divine Shield, Goody Two-Shields proves itself to be a better statted Scarlet Crusader, with an impressive 4 attack value that will allow this card to trade efficently with most early game minions, while surviving the trade through its Divine Shield. Moreover, its Spellburst effect, can allow this minion to value trade a second time the following turn.

However, one must keep in mind that unlike Secrets like Autodefense Matrix, the Spellburst effect may activate even if the first Shield hasn't been destroyed yet, basically nullifying this card's effect.

It is thus adviceable to trade with Goody Two-Shields before casting any spell, and then follow up casting a powerful on-curve spell like Blessing of Kings, turning this into an 8/6 with Divine Shield, or a cheap spell like The Coin or First Day of School.