This article is using {{Card template}}.
See Help:Style guide/Card for how to edit this kind of article.
Edit this article
Gonk, the Raptor
49985 • TRL_241
Regular 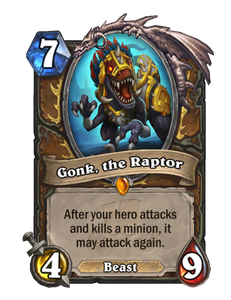 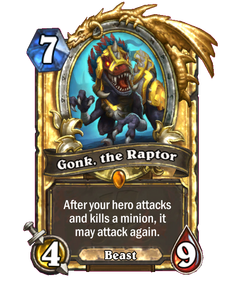 Dimensions: Full • 330 x 410px
Elite
After your hero attacks and kills a minion, it may attack again.
Flavor text

There’s a word for Zandalari druids who refuse to pledge loyalty to Gonk: “Delicious.” 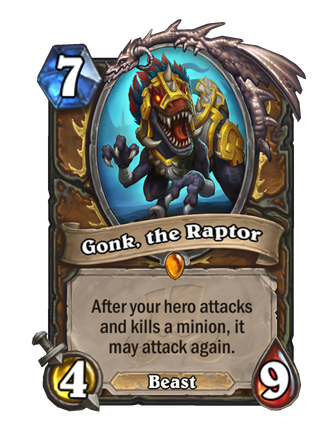 Gonk, the Raptor is a legendary druid minion card, from the Rastakhan's Rumble set.

Naturally, Gonk has synergy with

Spirit of the Raptor; with each minion destroyed thanks to Gonk, you are rewarded with additional draws. Drawing into cards such as

Bite can assist in clearing out minions with higher health.

Twig of the World Tree, giving you access to 10 additional Mana Crystals.

Baku the Mooneater are excellent sources of gaining hero attack without playing cards, which make Gonk useful even when resources of hero attack are limited.

Flobbidinous Floop is a great second resort if your Gonk has been destroyed before you could use it, also making it cheaper by 3 mana allowing more cards to be played, or to play Floop with as a second Gonk on board to utilize the stacking Gonk's effect, as stated in the Notes.

Being a Beast, Gonk can be drawn from and synergizes well with cards such as

Should you find yourself in a situation where you control 2 Gonks, you are granted two extra attacks per kill. This increases with the number of Gonks you control. This allows Gonk to be played as an OTK combo, using cards that copy Gonk and summon weak minions for the opponent, such as

Gonk, the Great Hunter, is the ancient raptor loa of shapes and master of the hunt. The Darkspear trolls heard many of the Zandalari's tales about Gonk. He taught both tribes how to be druids, and the Zandalari druids serve him as the Raptari. Gonk's high priest is

Wardruid Loti. The followers of Gonk and Pa'ku do not get along.

Gonk taught the Darkspear tribe how to contact the loa in a different way than they had before, thus allowing them to serve all the nature spirits at the same time instead of only one at a time as they used to do as loa priests (witch doctors). The other loa, such as Shirvallah, were against this but Gonk forced their hands in order to defeat Zalazane, who had trapped several loa inside the Emerald Dream. Through this method the Darkspear became druids, though the other loa are not happy about it and want the trolls to continue worshiping them one at a time.

Unlike the Darkspear druids, Gonk did not just speak to the Zandalari. For his Raptari, Gonk is not just a fragment or piece of him, but physically there, a real voice they can listen to in person.

In Hearthstone lore, Gonk serves as the patron loa of Gonk's Raptors, the ferocious, shapeshifting druid team in Rastakhan's Rumble.

Rikkar thought Gonk and Wardruid Loti were examples of inspiring contrast. Gonk was one of the oldest loa, and Loti one of the younger competitors in the Rumble (not to mention an advisor to

King Rastakhan! And one of the most talented shapeshifters in the world!), but the two of them joined forces to open the door for young Zandalari trolls to become Druids. Loti was the inspiring leader to a pack of howling, dinosaur-jumping lunatics. Maybe he could use that![2]