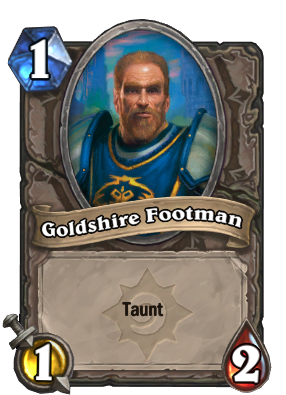 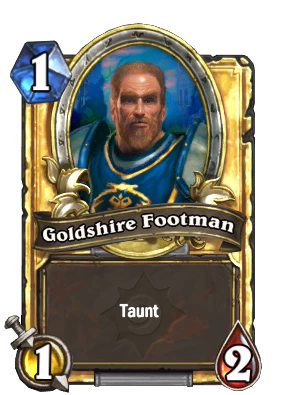 If 1/2 minions are all that is defending Goldshire, you would think it would have been overrun years ago.

Goldshire Footman is a neutral minion card, inducted into the Legacy set, formerly from the Basic set. 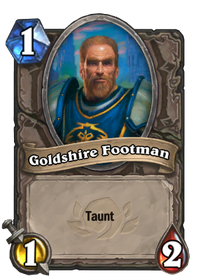 Two copies of regular and golden Goldshire Footman are automatically given after the player completes the Ranked's New player experience system, unlocking Wild and Classic format.

Goldshire Footman can provide some early game defense. However, its low Health allows it to be defeated very easily, making it of limited value overall. Its only real value is against hyper-aggressive decks where it will usually force the enemy's turn 1 summon to attack it instead of targeting your hero initially.

This section of the article is silly. It should not be taken too seriously.

However, it is a surprisingly tenacious card. The ability to Taunt with only 1 mana cost, in combination with the sheer intimidation factor that comes with playing a Goldshire Footman, has caused opponents, more often than not, to simply resign when this card is played.

Goldshire has roads that lead to Stormwind City to the northwest, Northshire Abbey to the northeast, Westfall to the west, and Lakeshire (Redridge Mountains zone) to the east. Its prime location makes it an important trade town. Travelers, merchants, adventurers, Stormwind guards, and priests from the abbey all stop and make regular visits to the town on their way to and from Stormwind, usually enjoying the hospitality of the Lion's Pride Inn, one of the most respectable ale houses in Azeroth.