The gold counter, found in the bottom right corner of most menu screens

Gold is a type of in-game currency that can be exchanged in Hearthstone. 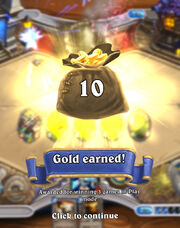 There are several ways to earn gold:

Currently, gold can be spent in many ways:

Good ways of earning gold vary based on skill and time available. For advanced players, the most profitable activity is playing Arena or Heroic Duel at a high skill level, offering extremely high gold (and arcane dust) rewards in terms of time and games played. For those less successful in the Arena or Duels, the simplest strategy is usually to play a lot of matches, steadily earning gold through quests and time in the game. Players with little time on their hands may want to focus on making sure they complete all quests.

Since gold is primarily used to obtain cards, players should also consider means of obtaining cards, card packs and arcane dust directly. The simplest is to complete at least one Tavern Brawl each week, earning a free Classic card pack. Success in the Arena or Duels can award card packs, cards and arcane dust, while obtaining a good rank in each Ranked play season can provide additional cards and card packs.

If at least 7 games were won, the player will be rewarded with a minimum of 150 gold (equivalent to the Arena entrance fee). Since Arena always awards a card pack as well as gold or other rewards, the 150 gold entrance fee can be considered a reasonable investment even if winning only a game or two.

Gold can be spent in various ways, depending on the player's interests. However, if the intention is to obtain cards, the player should consider the most efficient way to spend their gold.

Generally, buying card packs from the Shop is the quickest and easiest, but least efficient, way to obtain cards. If the player is able to consistently win 3 or more matches in the Arena, it is better to spend their money on buying an Arena run rather than simply buying card packs. Adventures also offer excellent value for money: the quality and quantity of cards awarded in each wing mean that even if the player wants only a few of the cards featured, they will obtain more dust by earning and then disenchanting the cards than by doing the same with card packs.

The efficiency of adventures is however balanced against the value of card packs. If a player is aiming to collect numerous cards from a new expansion, opening card packs will prove highly efficient, since most cards will be desirable. In contrast, the inefficiency of the disenchanting process means that if seeking a specific card from an expansion set, it is much more efficient to craft the card directly, even if that means spending gold in order to earn the dust to do so.

Prior to Madness at the Darkmoon Faire patch, or Rewards Track implementation, gold could also be earned by:

Tavern Brawls often provided an excellent opportunity for rapid gold-making, both through completing quests and through winning games.

There are two main advantages of Tavern Brawls in making gold. The first is that the matches are typically shorter than those in constructed or Arena play. Many of the Brawls have strong RNG elements which can cause matches to end very quickly, and the lack of punishment for losing games mean players are far readier to concede if it looks like they are going to lose, especially in the first few rounds. As a result, players can usually earn the "10 gold per 3 wins" reward far more quickly in Tavern Brawl mode.

The other advantage of Tavern Brawls relates to quests. A significant amount of quests require playing specific classes, which can provide a challenge in Play mode if players have little experience playing with those classes. Tavern Brawls with premade or randomised decks can significantly lower the skillcap for players, as can RNG-heavy Brawls; these can also compensate for players who lack quality cards for the classes in question, as well as saving time in looking up or devising new decks. These factors can make it easier for players to achieve wins with classes they do not normally play.

Tavern Brawls are also a far less critical play mode, with no significant MMR to damage. This can allow players to make decks to focus on quickly achieving a specific purpose, such as playing 20 minions that cost 5 or more, without concern for achieving victory in the match itself. Tavern Brawl mode also comes with its own deck slot, which can be useful for players who are already using all of their slots and don't wish to delete a deck in order to make one for a new class.